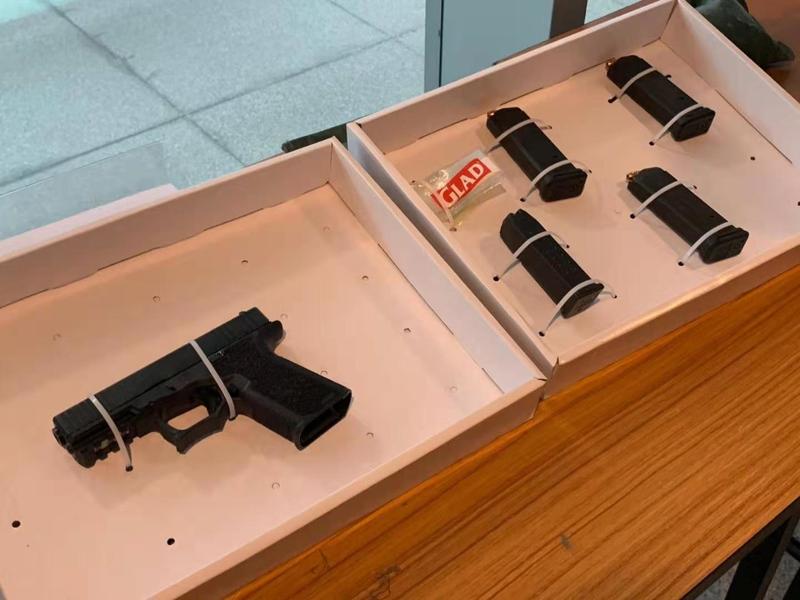 A semi-automatic pistol and magazines are among a cache of weapons seized by the Hong Kong police on Dec 8, 2019. (Photo: China Daily)

HONG KONG, Dec. 8 (Xinhua) -- The Hong Kong police said they seized on Sunday morning a semi-automatic pistol, 105 bullets and other prohibited weapons suspected to be used by radicals in a demonstration held in the afternoon.

Senior Superintendent Li Kwai-wah of Organized Crime and Triad Bureau said it is the first time that a handgun has been seized related to Hong Kong's demonstrations in recent months, and warned organizers and participants of Sunday's demonstration to watch out for personal and public safety.

The police received information suggesting that some members of a radical group, who had participated in an unlawful assembly on Oct. 20 and attacked the Mong Kok police station with a large number of petrol bombs, were planning to use weapons including guns to create chaos and attack the police during Sunday's demonstration, Li said at a media briefing.

The police therefore mounted an operation on early Sunday morning at 11 locations in various districts of Hong Kong.

In the Fortress Hill area on the Hong Kong Island, the police seized a 9 mm semi-automatic Glock pistol, which forensic firearm examination shows is in good condition, and five magazines, three of which were already loaded with bullets.

At that location the police also seized three daggers and some sabres.

In Heard Street in Wan Chai on the Hong Kong Island, where a suspected assembly point of the radicals is located, the police seized two bulletproof vests.

In Tsuen Wan, the New Territories, the police also launched a search operation and found a large amount of fireworks believed to be used for attacking police stations. Nine extendable batons and four pepper sprays were also seized.

Eight males and three females, aged between 20 and 63, have been arrested in the operation for offenses including possession of firearm without licence, possession of dangerous goods, possession of prohibited weapons and unlawful assembly.

Li said the police are investigating where the weapons come from and may make more arrests as the operation is still ongoing.