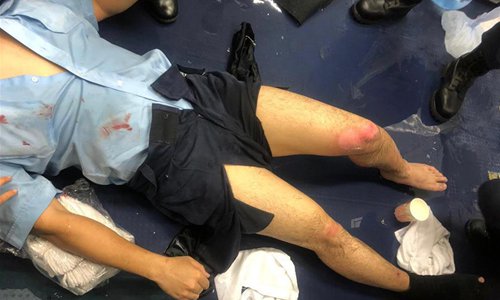 Some spouses of Hong Kong police officers jointly opened an account on China's Twitter-like Sina Weibo, which has nearly 60,000 followers in less than five days.
"We are wives of Hong Kong police, we have something to say," states the description of the account.
Creamy, the wife of a Hong Kong police officer and operator of the account, told the Global Times during an exclusive interview on Wednesday that they came to Weibo as many accounts supporting Hong Kong police had been suspended on Facebook.
The account, opened on Sunday, is aimed to catch attention and gather support, according to Creamy. "In case some unfortunate thing happens, there will be people standing by me."
"This is sad, we are police and police families, we should be the ones the least afraid of evil forces. However, we get scared and hesitate to express ourselves when we see no support for us on Facebook and other mainstream media, which are full of untrue and unfair reports," Creamy said.
A post on the police wives' account on Wednesday morning has gained about 70,000 likes as of press time.
"I feel so worried about the safety of my children as the new semester begins soon … I am surprised that there are so many people who care and support us. I am really touched," it said.
Creamy expressed her worries, helplessness and persistence since anti-extradition bill protests began two months ago. "The personal information of police families has been leaked and police dormitories being attacked since June, and we can do nothing to help."
Many Hong Kong police officers have resigned, been hurt or moved due to the continuous riots, according to Creamy.
Some police wives planned to attend some supporting activities for police but were stopped by their husbands for fear their personal information being leaked and their children being hurt by bad people in the dark.
Creamy said that, in the past, she would proudly tell her children that their father is a police officer. But now she has to tell them not to mention it in public to avoid being targeted.