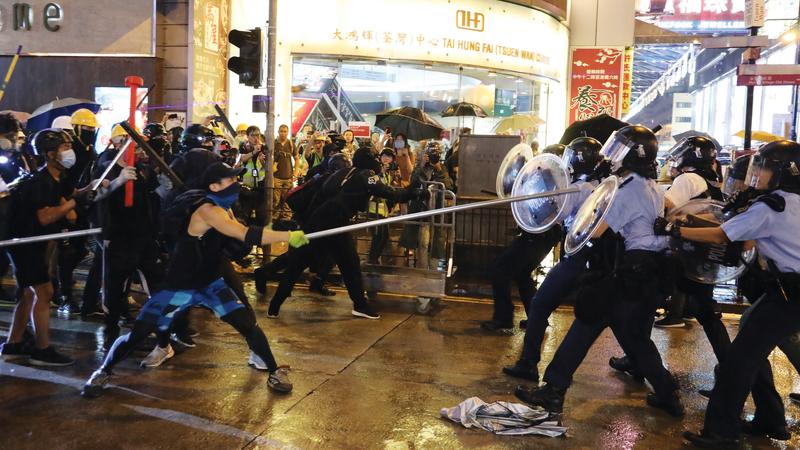 Appalling acts of violence over the weekend are pushing Hong Kong toward an "extremely dangerous situation", the SAR government said in a statement released early Monday.

The government urged the people of Hong Kong to pull together in the battle against violence and help restore peace and order.

Waves of violence, erupting in multiple locations of Hong Kong on Sunday, were "outrageous and have overstepped the bottom line of a civilized society", police said in a statement released early Monday.

Sunday's mayhem saw 15 police officers injured and sent to the hospital for treatment. During the violent clashes in Tsuen Wan on Sunday evening, outnumbered police officers had to withdraw pistols when one of their colleagues fell on the ground in retreat. One of the officers fired a warning shot in the sky to deter masked radicals from rounding them up with iron poles.

According to the police on Monday, the personal information of the police officer who fired the gunshot was leaked online and his family members were harassed.

In visiting the injured police officers in the hospital, Police Commissioner Stephen Lo Wai-chung said he was outraged by the wanton unlawful violence that paid no regard to others' safety. The police will take relentless enforcement action to bring those involved to justice, Lo vowed.

Violence and vandalism continued to descend on the city for the 12th consecutive weekend. Anti-government radicals deviated from the main crowd of a public procession soon after it started at 3 pm in Tsuen Wan. Decked out in full protest gear, the radicals blocked roads, set up barricades and paralyzed traffic. They later escalated violence by hurling bricks and petrol bombs and aiming laser beams at police officers.

Police also appealed to members of the public to make a clean break with violent radicals and expressed hopes for the journalists to cooperate with police operations while paying attention to their own safety.