CHINA HK police to recruit 1,815 officers to deal with unrest

HK police to recruit 1,815 officers to deal with unrest 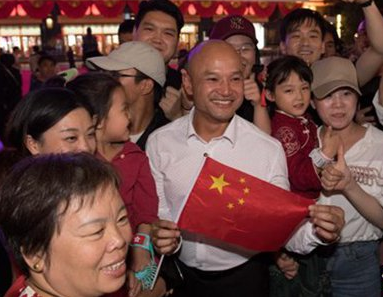 Hong Kong police aim to recruit 1,815 officers by March in a bid to better safeguard the city which has been troubled by six months of social unrest and encourage those who share the city's determination to uphold the rule of law and protect the city to join the service.

The Hong Kong-based Singtao Daily reported on Sunday that city police announced their goal to recruit 1,815 police officers including 195 interim police inspectors and 1,620 officers within the current fiscal year which ends in March. Some 320 auxiliary police officers were also expected to join the force in addition.

New recruitment posters were also made public with slogans calling on potential applicants to "protect our home Hong Kong," uphold the rule of law," and "safeguard Hong Kong and crack down on crimes," according to the report.

The posters also featured pictures of riot police on duty.

According to the police announcement, 483 Hong Kong police officers have been injured during the months of unrest in the city. Their injuries included knife wounds, burns from corrosive liquids, fractures and wounds from arrows shot from bows.

In October, Hong Kong police confirmed with the Global Times that they are planning to recall more than 1,000 retired officers to deal with the ongoing unrest in the city.

The 30,000-member Hong Kong police force has been under great pressure since the outbreak of Hong Kong's unrest in June and it remains understaffed.

Wenweipo.com reported that the first batch of retired officers could rejoin the police force this month.