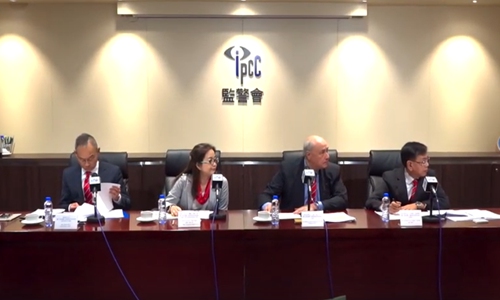 Hong Kong's Independent Police Complaints Council (IPCC) on Wednesday denied its international experts "quit" as some Western media reported, saying they had stepped aside after finishing an interim report.

Anthony Neoh, IPCC chairman, told Hong Kong media on Wednesday that the international experts were not resigning. It was just they finished their current phase of work collecting evidence and drafting a report. They had shown interest to come back and help when the IPCC moves to the next phase, he said.

Tony Tse Wai-chuen, a lawmaker and IPCC vice-president, also said Wednesday the international experts did not resign but stepped aside after finishing this stage of their work, local media reported.

The statements came after the Wall Street Journal on Tuesday published a report, quoting the panel as saying it "steps down from probe of Hong Kong police" as the city's watchdog "lacks powers to properly investigate" use of force during police operations.

Using "stepping down" to describe the panel's normal working arrangement was just a typical trick of some Western media, according to Fan Peng, a member of the Chinese Association of Hong Kong & Macao Studies.

The media was exploiting the public's limited knowledge of the IPCC panel's remit and creating the impression that the police watchdog was restricted from working properly.

The analyst pointed out that the international expert panel, hired by the IPCC, has its missions and working pace within the framework of laws and administrative regulations of the Hong Kong Special Administrative Region.

The panel helped assess the independence and use of force of Hong Kong police operations and was designed to be a consultative body rather than an instructor, Fan noted.

"The IPCC doesn't have to embrace everything the panel comes up with," Fan said.

He also noted if the panel has offered advice, they must pass judicial organs before taking any effect.

The IPCC announced to establish an international expert panel on August 23 and later on September 4 released a list of the five-member panel chaired by Dennis O'Connor, who had investigated police action during disturbances in Britain in 2011.

According to the IPCC website, the overseas experts'role is to provide international experience and advice for the IPCC's thematic study on police practices and procedures arising from recent public order events.

Ian Grenville Cross, Hong Kong's former director of public prosecutions, told Wen Wei Po on Wednesday that the IPCC has many experienced experts who can do the work in accordance with mature internal procedures.

Anthony Neoh on Saturday told media that the expert panel did not have a thorough understanding of the complicated situation in Hong Kong.

"I already told them their opinions are noted with thanks but we must act according to laws," he said.

The council also included police watchdog experts from Canada, Australia and New Zealand, and a British specialist on crowd behavior.

One of the council's specialists, Clifford Stott, in early November posted a report on Twitter saying that the IPCC had structural limitations in the scope and power of the inquiry.

The IPCC replied then that the document released was not an announcement of the panel, but the personal action of Stott without prior consultation with the IPCC.

The IPCC was disappointed with the tweet, according to a statement by the police watchdog.