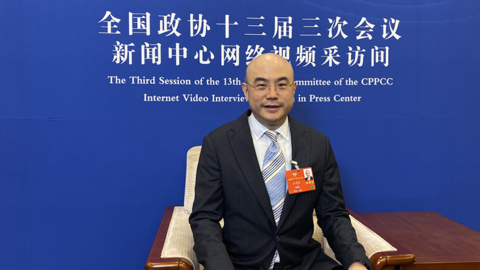 Protests continued in Hong Kong during the weekend over a proposal approved by China's top legislature the National People's Congress to enact a national security law for the city. Though Beijing says the draft and the eventual law will ensure Hong Kong's "high degree of autonomy," the decision has triggered controversy and protests have subsequently heated up.

CGTN reporter Wang Xiaonan spoke to Marvin Hung Ming-kei, CEO of Hong Kong-based Hop Hing Group and member of the National Committee of the Chinese People's Political Consultative Conference (CPPCC), about the legislation, the impact of months-long violence and the COVID-19 pandemic on Hong Kong's economy, and what's in store for the relationship between Hong Kong and the mainland.

Hung, also a senior vice chair of the Center for China and Globalization, manages the cooking oil and restaurant empire in his family business. Hung and his employees have frequently been the subjects of harassment because of his pro-establishment position.

The following are excerpts from the interview, which have been edited for clarity.

CGTN: What do you think of the national security law for Hong Kong?

Hung: Hong Kong has been experiencing wave after wave of very violent protests since last summer because of the introduction of the fugitive offenders ordinance. Even after the Hong Kong Special Administrative Region (HKSAR) government's formal withdrawal of the bill last year, the protests kept going and degenerated into riots like what we are seeing now across the U.S. Ordinary innocent citizens were intimidated, shops vandalized and burned, public assets such as mass transit railway stations and traffic lights were damaged badly.

This is not about justice. No justice can justify such unruly, criminal acts. The violence has got to stop and the riots have got to stop. I think saying no to violence and allowing social order to return must be a universal value. The national security law is an important piece of legislation that enables Hong Kong to restore social order and the central government has the constitutional right to enact the law.

With what is going on, the enactment of the national security law comes at the right time. It's in compliance with Article 23 of the Basic Law of Hong Kong, which states that the HKSAR shall enact laws to prohibit any act of treason, secession, sedition and subversion against the central government.

CGTN: Will the law heighten tensions between the West and China, and cause them to contain China more recklessly?

Hung: Ensuring the security of Hong Kong and the country is of paramount importance to China and it is our country's bottom line. This is not negotiable. Violent protests have plunged Hong Kong into massive chaos and Hong Kong is badly in need of a return to social order so that ordinary citizens can return to normal life.

No country can tolerate treason and subversive activities. Western countries like the U.S. have their respective laws to address offenses of treason, subversion and others. With the ongoing chaotic situation in Hong Kong, there is an urgent call for a national security law.

Over the past year, tensions between China and the West have been growing, in particular our relationship with the U.S. The COVID-19 pandemic has cast the biggest chill over Sino-U.S. ties for decades. China has been caught in the eye of the storm with political attacks and trade restrictions. As I said, protecting our national security is our country's bottom line. Given the situation now, we have no choice but to face up to the challenges.

CGTN: How close is Hong Kong to the mainland in the economic realm? The unfolding pandemic has shut down nations, cut off trading routes, and paralyzed companies, threatening to upend the global economy. Could the two sides cooperate in these tough times?

Hung: Hong Kong's GDP shrank by 8.9 percent over the first quarter of the year. Tourist arrivals in the city dived almost 99 percent in February and March. We are seeing a rising tide of unemployment and bankruptcy.

We are losing the status as one of the world's most open and creative financial hubs as the COVID-19 outbreak has further crippled an economy that's already riddled with wounds from months-long protests.

The mainland, which is rebooting the economy, has an economic model that has plenty of advantages. In my view, Hong Kong and the mainland can collaborate in the new retail sales, as various social media have an increasing impact on retail. Such developments as 5G can further facilitate online business. And, of course we can explore more.

We are encouraging the young generation of Hong Kong to start their own business on the mainland. In this way they can also learn more about the mainland's business model and lifestyle.

I went to the U.S. for education at the age of 13 and after graduation, I came back to mainland China to start my businesses. At the time, I knew nothing about the mainland and could barely speak any Chinese. Now that I made it, I have every reason to believe that Hong Kong youths can also succeed. And, certainly for those of us who have walked through the path, we can always be there for them to help them understand how to start and navigate this journey.

CGTN: When I spoke to Ms. Annie Wu Suk-ching last November to get her take on Hong Kong's violent protests, she said, "I think we have lost two entire young generations of Hong Kong." Do you still have confidence in the city's young people?

Hung: I think many of the young generation in Hong Kong have not had a full perspective of the mainland today. Many of them have not been to China and their understanding of China is mostly second-hand information. Through my CSR (corporate social responsibility) work which provides opportunities for young Hong Kong people to visit the mainland and exchange with their counterparts here, they usually hold a different view of China and the world from those who have never been here before. I firmly believe that we should offer more opportunities for Hong Kong youths to come to mainland cities on exchange programs, getting to know the country's history, culture and developments.

We should give them more chances to understand the country's cultural heritage as well as its business and social environment. I truly believe in the power of change. When there is a will, there is a way.