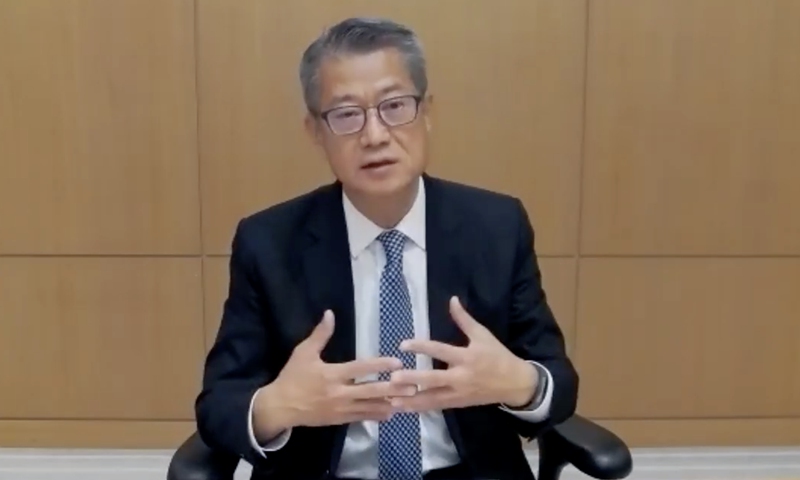 Hong Kong has made long-term preparations for possible countermeasures launched by the US government on sectors including trade, finance and technology in response to the upcoming national security law for the special administrative region (SAR), Hong Kong's finance secretary told the Global Times on Friday. The city has the confidence as well as the strength to defend its own business and financial stability from external risks and pressure, and is boosted by mainland support.

US President Donald Trump made an announcement on Friday concerning his new policies toward China, a counterstrike in response to the top Chinese legislator's passage of a draft decision to formulate and enact a national security law for the Hong Kong SAR. US Secretary of State Mike Pompeo said on Wednesday that Hong Kong has lost "its autonomy" and no longer enjoys special treatment, which signaled that Washington is likely to impose punitive measures on trade and finance, ending the special trade ties between the US and the Chinese city which has been widely regarded as a major battleground for US-China tensions.

"We have been preparing for all the different scenarios," said Hong Kong Finance Secretary Paul Chan Mo-po, noting that revoking the city's special treatment status would have little impact as its services sector dominates the local economy. The added tariffs would only affect locally produced products exported to the US, which account for less than 2 percent of Hong Kong's overall manufacturing and less than 0.1 percent of its overall exports.

"Our special treatment status in trade is entrusted by the Basic Law. The law permits Hong Kong to join the WTO as Hong Kong, China, showing that the SAR's independent tariff zone is granted by the mainland, not by any foreign country," he said.

While the US move could further weigh on the attractiveness of Asia's foremost business and investment center, as reported by some Western media, the local official reaffirmed that fundamental advantages of the global financial hub won't be weakened under the new national security law.

"The national security law for Hong Kong is aimed at four categories. Other [than those categories], the legitimate rights of foreign investors are protected and ensured by the mainland and the Hong Kong SAR government," Chan said, noting that as a global financial hub, Hong Kong enjoys four core edges.

The city has been always backed by a powerful real economy, and local development has relied on the country's growth. The "one country, two systems" principle has also ensured advantages which won't be altered due to the new national security law, including free capital flows and a foreign exchange mechanism, the finance secretary added.

The national security law for Hong Kong will effectively prevent, stop and punish any act occurring in the city intended to split the country, subvert state power, or organize and carry out terrorist activities and other behaviors that seriously endanger national security, as well as activities of foreign and external forces to interfere in the affairs of the SAR, according to the top legislator. Officials and Hong Kong affairs observers have recently stressed that the legislation does not target individual freedoms or businesses, rebutting claims that the law would change the nature of "one country, two systems."

"The markets do not lie," Chan said, noting that from stock markets to foreign exchange markets, there have been no major fluctuations over the past few days, reflecting an overall rational attitude toward the new law. Additionally, banking and asset management business representatives say they have not seen a palpable outflow of capital, the official added.

Many foreign officials and media outlets have rushed to claim Hong Kong's status as a global financial hub has ended due to the impending national security law, using unsubstantiated reports of capital flight. For instance, the American Chamber of Commerce in Hong Kong was quoted in recent media reports to have said that the law could undermine the city's status as a business hub and worsen risks it already faces from the economic war between China and the US. However, such claims have been widely rejected by a group of foreign entrepreneurs and business representatives who have lived in the city for years. They see the new law as an effective way of tackling deep-rooted problems and continued social unrest - including illegal foreign meddling and secessionist activities that jeopardize the city's business environment.

"When we talked with foreign business representatives last year, many raised the same concern about Hong Kong's investment environment: the city's security, which had been severely affected by the social unrest," Chan said, noting that now they also consider social stability and rule of law as important factors when making investments, which explains the positive attitude toward the new law.

The announcement of the formulation and enactment of the national security law for Hong Kong, however, could have been sudden for some people, who might have raised doubts, but the legislation won't have any impact on the overall business environment as there is no restriction on capital flows nor on foreign exchange control, Chan said.

"As long as foreign investors are not engaged in activities relevant to national security matters, they have nothing to worry about," he said.

Some Hong Kong affairs and China-US relations observers share the consensus that - as tensions between the two largest economies across the world continue to escalate - the SAR, which has been serving as a bridge connecting the West and the East, is now stuck in the middle, becoming a pawn of Washington in its attempts to pressure Beijing.

In terms of tightened restrictions on tech exports, Chan said that when dealing with the US, the city should continue improving trade relations with other trading partners such as Europe and Japan. Even if tensions come to a financial war, which is widely thought to be the US' "nuclear option" to curb China, Hong Kong's financial market is able to withstand many challenges given its experience over the years.

"Our banking system remains robust, and it was not crushed by months-long social unrest last year. I've also been leading a working group to supervise abnormal market activities to prevent the short-selling of funds or Hong Kong dollars and other potential risks," Chan said.

"Two years ago when China-US trade frictions began, the Hong Kong SAR studied the situation, forecasting that confrontations might spread from trade to other sectors, likely finance. We've prepared for it," he added.

The security of the financial market is also part of national security, so authorities in Hong Kong remain highly cautious.

"We have confidence and experience in dealing with challenges as the financial market in Hong Kong has gone through a lot. With the support of the whole country, we have nothing to be afraid of," he said.