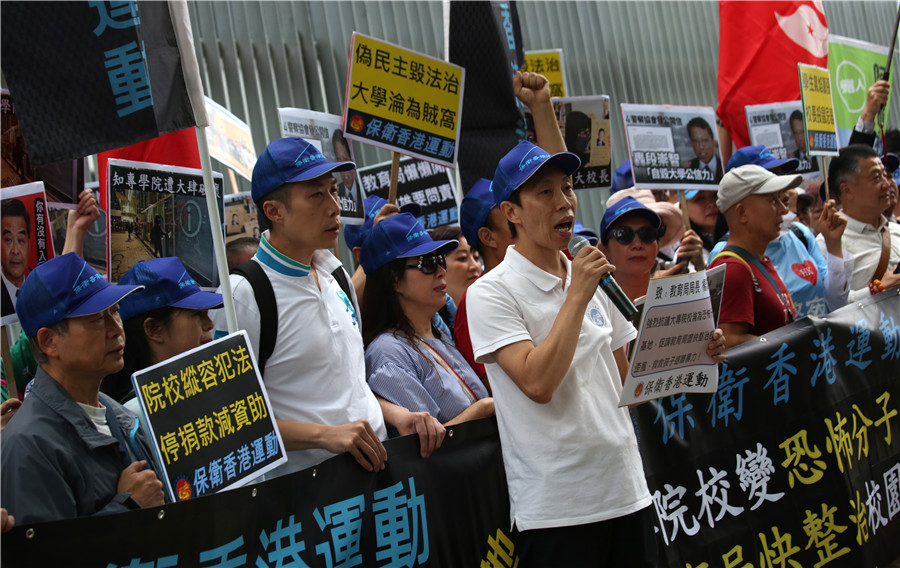 It's impossible for people in Hong Kong to escape the effects on daily life of the city's ongoing protests. Even those who stay far away from public demonstrations must deal with changes that may affect their livelihood or quality of life.

There's Chan, in his 60s, who regrets having to suspend a tradition his family has enjoyed for decades of gathering for dinner every weekend. Family elders are unable to see their grandchildren.

Chan lives on the southern Hong Kong Island with his wife, daughter and parents. His nephews live in Kowloon. Before the violence started, they'd get together every weekend for a pleasant supper in popular areas like Tsim Sha Tsui and Causeway Bay.

They were caught up in a protest on Hong Kong Island in September. Leaving the restaurant, they found all public transportation blocked－subway trains were out of service, buses were rerouted and taxis avoided the area. It took an hour to hire an Uber taxi to drive them home.

These disruptions became increasingly common. Family members arrived late because protesters blocked traffic. They'd have to eat in a hurry for fear of demonstrations breaking out nearby. On one occasion, they learned a protest was planned in Causeway Bay, so they booked a restaurant in Central, three stops away. However, the protesters deviated from their planned route and turned the streets of Central into chaos.

A 28-year-old clerk named Li had to work from home through much of October, or face being stranded in the city overnight. She lives in Shenzhen and works on Hong Kong Island. She couldn't make it home after work at night. Widespread damage to Hong Kong's subway system necessitated early closure of the lines every night while workers carried out repair work.

Li was forced to communicate with her supervisors and colleagues by telephone. It wasn't an efficient way to work. When she finally was able to get back to the office, she spent her first four hours filling out all the paperwork and forms she missed during her absence.

A young chef, who works in Mong Kok, Kowloon, said even those who try to remain neutral can be caught up in the violence on the streets. He recalled that one Sunday when pitched battles were escalating, the owners of the restaurant decided to close early, and the chef found himself walking the streets to make his way home.

"It was like treading on thin ice when I had to walk in the middle of the road amid a standoff between the police and black-clad protesters," he said.

People are forced to make adjustments, said Mike Rowse, a former HKSAR government official who has lived in Hong Kong for over 40 years.

One of his friends who practices yoga had to find a different center, where the service and equipment are poor. Traffic near her regular yoga studio is frequently blocked.

"And you might think that's not a very important problem, when one person can't do their yoga class. But it is affecting people's lives," said Rowse.

Mark Pinkstone, a current affairs commentator and former government chief information officer before 1997, said he was unable to withdraw cash one day because the bank branches and ATMs in his neighborhood were smashed.

He also said he has deleted many Facebook friends. Otherwise, he'd be drawn into arguments about the situation and he wants none of it, he said, adding that when it's all over, he will "re-friend" them.

The protracted demonstrations affect people in many ways, and rioters are destroying the city and killing the lifeblood of Hong Kong and need to be stopped, Pinkstone said.