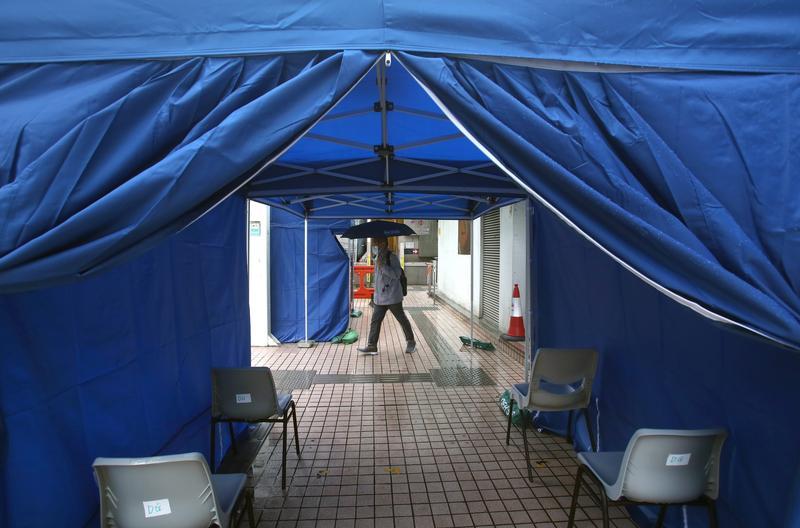 WA man walks across one of the temporary test centers on Monday set up by public hospitals in their emergency departments outside Queen Elizabeth Hospital. (Photo: China Daily)

Hong Kong recorded 41 new coronavirus infections on Monday, bringing the city’s total number of cases to 682 - nearly double the tally of 357 a week ago.

The continuous rise in infection numbers has pushed the occupancy rate of the city’s 1,012 isolation beds in public hospitals to 65 percent - the highest since COVID-19 hit Hong Kong in January.

The Hospital Authority said 39 confirmed patients were still waiting to be admitted to hospitals on Monday afternoon, while on average they have to wait a day. It’s also said isolation wards at several hospitals are already full.

Health officials and experts suggested transferring patients with mild symptoms to “second-tier” isolation wards or even home for treatment if the strain on isolation wards continues. But the risks entailed in such a move were also noted.

Imported cases continued to fuel the tally of new infections, with 34 of the new patients having traveled outside Hong Kong during the incubation period. Eighteen of them were Hong Kong students returning from overseas - mostly from the United Kingdom.

The 21 male and 20 female new patients, aged 11 to 65, included a student nurse who visited a bar in Tsim Sha Tsui on March 19. Her case added to the city’s largest infection cluster - the one related to bars - making it at least 63 people.

Health authorities are still investigating the chain of transmission of four of the newly confirmed patients, including a policeman working at Shek Kip Mei police station. Other two local infections are close contacts of previous patients.

Six more were discharged from the hospital on Monday, bringing the total number of recovered patients to 123. Five of the confirmed patients were in critical condition.

The beds will serve recovering patients without a fever for more than 48 hours, who have no respiratory symptoms, need no oxygen support and show better blood test results, said Lau, who added that freed-up “first-tier” wards will be used for more urgent patients.

The authority’s chief executive, Tony Ko Pat-sing, said the additional 400 beds might not be enough to ease the huge pressure that hospitals are facing. He said medical resources should be reserved for more severe cases, so patients in a good condition might need to be quarantined in the community.

These patients are believed to need to take medicines on time only as ordered by doctors and to stay quarantined.

Echoing Ko’s views, Yuen Kwok-yung, a top infectious disease expert at the University of Hong Kong, suggested patients with mild or no symptoms, such as a runny nose or a sore throat, be sent to quarantine camps to free up space in public hospitals if infections continue to surge.

“For those who don’t need treatment by medical workers, they can even return to home quarantine after their viral loads come down,” said the government adviser, adding that a coronavirus patient develops antibodies seven to 10 days after his or her infection and thus is less likely to transmit the virus to family members.

However, Ho Pak-leung, a leading microbiologist at HKU, said sending patients home before they are fully recovered could be a very dangerous move that may lead to infections in apartment buildings, although he agreed Hong Kong’s public healthcare system was “on the brink” of collapse.

To ease pressure on public hospitals, Ho also suggested confining patients in stable condition to government quarantine facilities to ensure those still testing positive for the virus cannot go anywhere in the city.