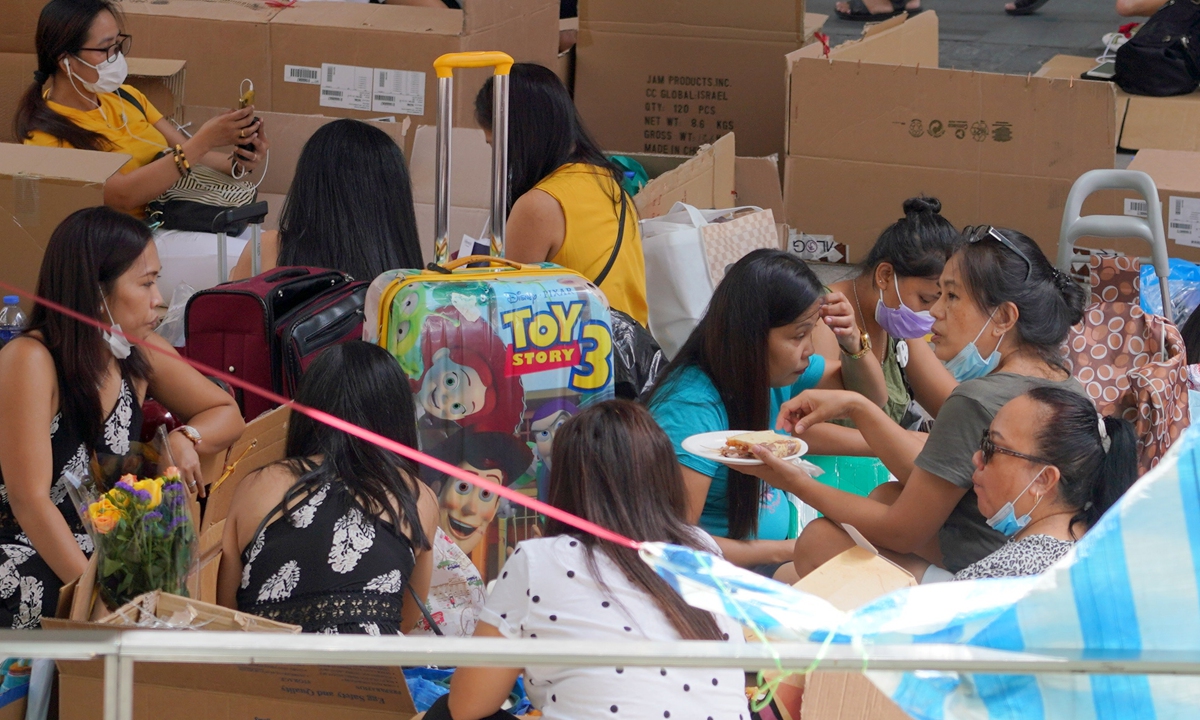 A large number of foreign maids gather Sunday in the streets of Central Hong Kong and some of them fail to comply with the order of keeping social distance and wearing masks. (Photo: cnsphoto)

Hong Kong is recruiting some 2,000 people with medical knowledge to help with the mass testing for the novel coronavirus which will start on August 31 and last for two weeks, with virologists emphasizing that testing kits should be optimized to be suitable for various strains of the virus, given Hong Kong's active international interaction that has caused the city's complex epidemic situation.

Hong Kong residents can take the free test on a voluntary basis and sample collection centers will be set up in spacious halls or outdoor grounds. Each of the city's 18 districts will have 10 collection centers, Hong Kong media reported on Monday.

With 44 infections reported on Monday, the city has seen daily new cases fluctuating over the past week. Hong Kong media Sing Tao Daily cited a local official as saying that although the number remained in the double-digit range, the infection rate showed a rising trend. The city government wants to promote extensive testing to identify silent carriers in communities and allow residents who want a test to get one, Sing Tao reported.

Yang Zhanqiu, a Wuhan-based virologist, told the Global Times on Monday that Hong Kong's complex epidemic situation — caused by international interactions — has raised the requirement for testing kits used in the city.

The kits should be sensitive and accurate for a variety of strains of the virus, otherwise people with one subtype may go undetected if the kit is more suitable for another subtype, Yang explained.

Most virus strains in Hong Kong's latest wave were found to be similar to those prevalent in the Philippines. But strains tracing back to Kazakhstan and Pakistan were also discovered, media reported.

As media reports earlier claimed the testing would start on July 24, some Hong Kong residents urged the city government to accelerate the preparation work as the window to control the epidemic is narrowing.

"High-risk groups should be tested repeatedly to guarantee they do not get infected after a test," Yang said.

The city has registered 4,525 infections and 69 deaths so far. Hong Kong authorities on Monday announced a one-week extension of the current epidemic control measures to August 25, including the ban on nightly dine-in services.