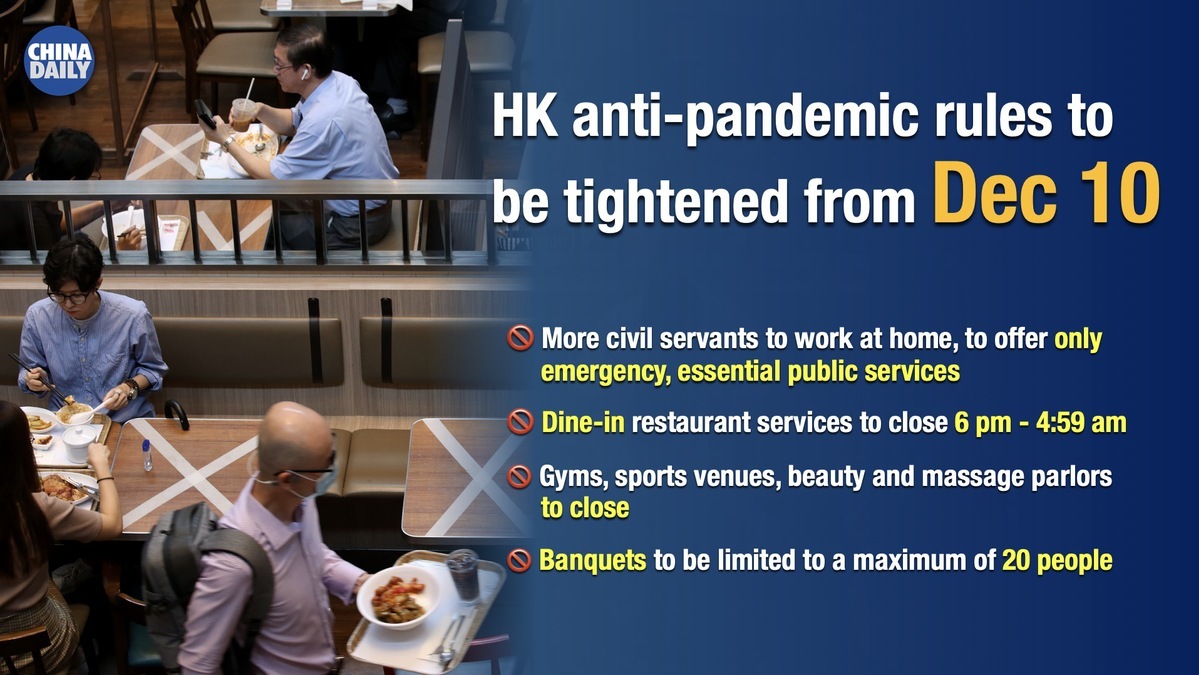 Announcing the details on Tuesday, Secretary for Food and Health Sophia Chan Siu-chee said the anti-coronavirus curbs have to be tightened because gatherings did not notably decline after the last round of rules took effect. She appealed to residents to reduce gatherings during the Christmas holidays.

The government will shut down sports venues, fitness clubs and massage and beauty salons, adding them to a string of leisure venues already closed. The new measures will take effect on Thursday and last for at least two weeks.

Hong Kong recorded a total of 1,274 new coronavirus infections in the past two weeks, which translated to 91 cases per day, Chan said. About 92 percent of these cases were locally transmitted.

Since the fourth wave which began in mid-November, there have been seven clusters with more than 10 patients. Three of them involve more than 50 patients.

The Executive Council approved a new regulation on Tuesday, allowing the government to confine people subject to mandatory testing at homes for as long as one week before their test results come back, according to Chan.

The government can also transfer them to testing centers or other designated places for testing if necessary. Food and necessities will be provided if the order lasts more than 12 hours, Chan said.

In a move to control imported cases, Chan said the government will arrange shuttle buses to pick up travelers arriving from overseas to designated hotels for quarantine. She said details will be announced as soon as possible after negotiations with hotels. 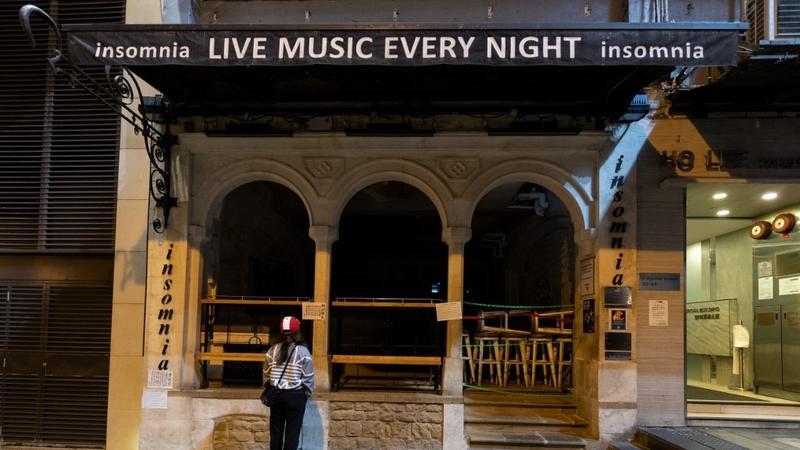 A woman looks at a placard displayed at the entrance of a closed live bar in the entertainment district of Lan Kwai Fong in Hong Kong early on April 5, 2020. [Photo/Agencies]

Three of the 38 people currently in critical condition are aged below 50 while seven are below 60, he added.

The city's total number of confirmed coronavirus infections reached 7,075, which means one out of every 1,000 Hong Kong residents has once contracted the virus.

The fresh count included five imported cases and 95 locally transmitted ones, Chuang Shuk-kwan of the Centre for Health Protection (CHP) said at a separate briefing in the afternoon. Twenty-seven of the new cases were untraceable, close to the average in the past week.

Chuang said the CHP saw two of its staffers confirmed as infected and another preliminarily positive on Tuesday. Four people working at the center are now infected.

Thirteen new infections belonged to the dance club cluster, which has snowballed to have more than 660 confirmed patients, according to Chuang.

Speaking to the press before the weekly Executive Council meeting on Tuesday morning, the city's Chief Executive Carrie Lam Cheng Yuet-ngor described the fourth wave of infection as "very worrying".

Lam said the current wave is more complicated than previous outbreaks because many clusters have sprung up and patients can be found in all of the city's 18 districts.

The Asian financial hub is struggling to contain its latest wave of COVID-19 infections, with case numbers often exceeding 100 a day last week -- the most since August. That has prompted the government to gradually tighten its social distancing rules, recently raising fines for those breaching restrictions and sending civil servants back to working from home.