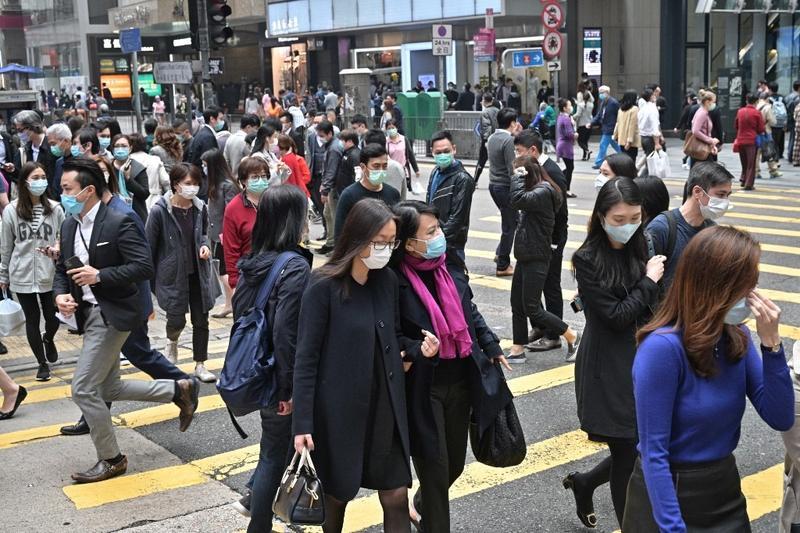 Pedestrians wear face masks, as a precautionary measure against the COVID-19, in Hong Kong on March 12, 2020. [ANTONY WALLACE / AFP]

HONG KONG - Hong Kong on Saturday confirmed four more cases of coronavirus infection, three of which are linked to overseas travel, bringing the tally to 141.

Meanwhile, a pet dog which was the world's first animal to have been infected was tested negative after being quarantined at an animal keeping facility for two weeks. The dog has been returned to the owner.

One of the three infected patients with travel history is a 39-year-old woman who visited Dubai of the United Arab Emirates and Madrid of Spain from Feb 27 to March 11. The second patient, a woman 28 years of age, had stayed in London from Jan 23 to March 11. She returned to Hong Kong on flight BA31. The third patient is a 59-year-old man who lives in Tsing Yi is a relative of another patient. They both visited Morocco in Africa together.

A fourth patient involved a 59-year-old man who lives in Tai Po's Fu Heng Estate, a public housing complex, where two other people in the same building were earlier confirmed to have been infected.

Chuang Shuk-kwan of the Centre for Health Protection of the Department of Health said the origin of the case is still unknown. He had disease on waist and usually stayed at home and dined out occasionally.

The newly confirmed patient and the couple confirmed earlier both live in the building's 13th unit, with several floors apart.

On Saturday afternoon, some people with protection gears were seen disinfecting handrails of the building's entrance door and other locations.

Chuang said experts will be dispatched to the scene shortly to check whether there is any environmental factor among the three cases. They will inspect the drainage pipes and lifts of the building. She added that only after the inspection could the government take measures accordingly.

Chuang also said that the respiratory sample of a recovered patient who just returned the city from Japan also tested positive. The 85-year-old male passenger of the Diamond Princess cruise ship was confirmed to be infected with the coronavirus on Feb 4 in Japan. Since then, he stayed in Japan for treatment. After being tested negative twice to the virus, he returned to Hong Kong on March 10. He has been admitted to the hospital later and is under medical observation.

Chuang said it was believed to be caused by the remains of the coronavirus, adding that similar situation also occurred on previous cases. She said Diamond Princess passengers returning from Japan will be reviewed and receive additional virus tests if necessary.

The Center for Health Protection said it does not necessarily mean the patient contracted the virus again or that she is infectious.

Also on Saturday, three more infected patients discharged. So far 80 patients have been released from hospital.