An opinion poll held during a major rally held in Hong Kong last weekend showed most participants hoped that the city's police would strengthen law enforcement and restore its peace and order, the rally's organizer and pollster local think tank PolitiHK Social Strategic said on Thursday. 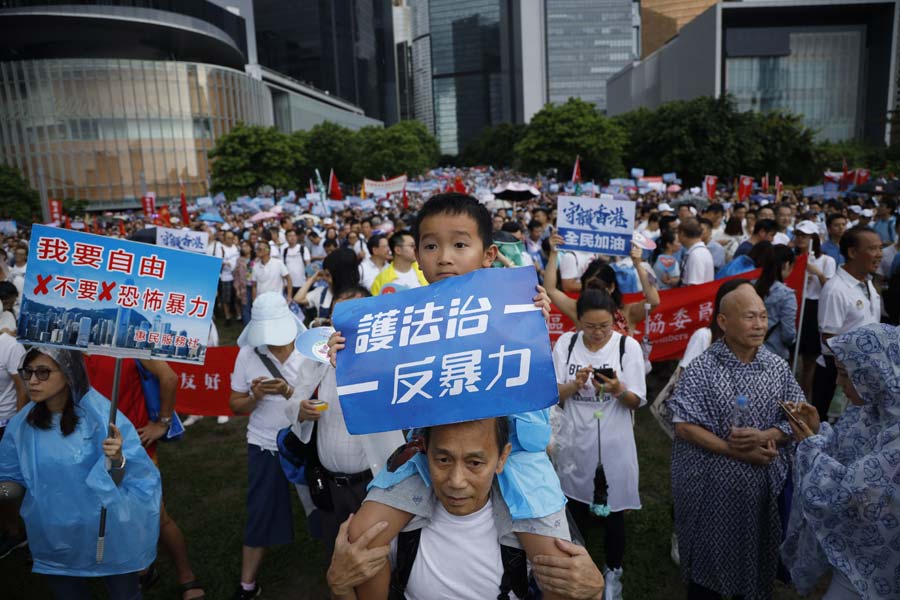 A boy holds a placard that reads "Safeguard the Rule of Law" and "Say No to Violence" during a peaceful rally at Tamar Park, Hong Kong, July 20, 2019. (Photo: China Daily)

The think tank said the rally's participants called for stricter law enforcement by the police and an investigation into the rioters' legal liability in the series of anti-extradition bill protests in the past two months.

The results also indicated that the organizers of those violent demonstrations should be held accountable for the damage made to public facilities and pay for the losses incurred, as they have allowed the protests to turn violent and disruptive.

"We collected and summarized those opinions so that different voices of Hong Kong people can be heard," said Innes Tang Tak-shing, chairman of PolitiHK Social Strategic. Those demands were collected through various channels, including on-site polls and online platforms, he added.

The think tank has organized two mass assemblies to support the police. They were attended by 165,000 and 90,000 people on June 30 and Aug 3, respectively.

Also on Thursday, more than 100 people attended a rally at Tsim Sha Tsui Star Ferry Pier to pay respect to the national flag.

The rally was held in response to a series of violent protests that have seen the national flag desecrated and national dignity undermined. A spokesman for the organizers of the rally said the "one country, two systems" principle is now facing its biggest challenge in two decades as black-clad protesters tossed the national flag into the sea twice and blatantly defaced the national emblem.

Calling them "extremely arrogant and unscrupulous rioters", the spokesman added, "What awaits them will be heavy legal liabilities and indelible shame in history."

According to the National Flag and National Emblem Ordinance of the Hong Kong Special Administrative Region, "a person who desecrates the national flag or national emblem by publicly and willfully burning, mutilating, scrawling on, defiling or trampling on it" commits an offense and is liable on conviction to a fine and imprisonment for three years.

At the rally, a 70-year-old retired public school teacher, surnamed Cheung, who brought his two grandchildren, said: "I want to send the message that Hong Kong is part of China and we should all cherish peace and order."

A businessman, surnamed Wong, delayed his regular commute between Hong Kong and Shenzhen to attend the rally. "Radical acts are intolerable. The police should be resolute in enforcing the law," he said.