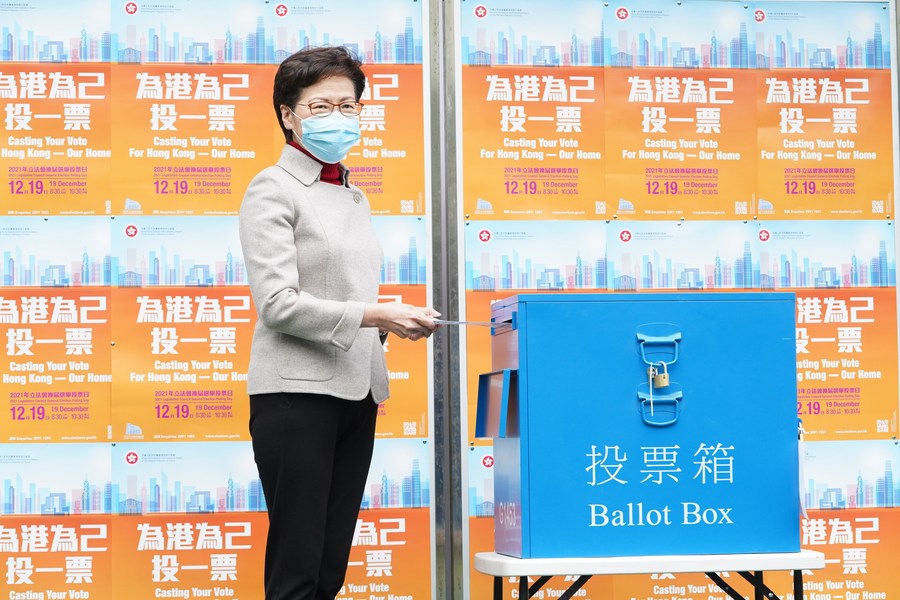 Voters and analysts hailed the poll as open and fair, and said it offered a strong guarantee for the region's future stability and prosperity.

With voters casting their ballots at more than 600 polling stations, 90 lawmakers for the Hong Kong Special Administrative Region's seventh LegCo were elected from the Election Committee, geographical and functional constituencies. After taking office on Jan 1, they will serve the public for the next four years and take part in their first meeting on Jan 12.

For many, the election under the improved system was a totally different experience.

According to an opinion poll conducted by the Bauhinia Institute, a think tank based in Hong Kong, 77.9 percent of 1,528 voters surveyed believed the LegCo election is of great importance to the region's future, and 75.8 percent agreed that the poll would be fair and widely representative. More than 72 percent of those surveyed were confident the election would produce LegCo members who love the motherland and their home city, thus benefiting all Hong Kong people.

This is further evidence that the election, the first major such exercise after the electoral system reform, was more about which candidate can serve the SAR better and help take measures to improve Hong Kong people's livelihoods.

Economist David Wong Yaukar, who is also chairman of the Education University of Hong Kong Council, said the election was a vast improvement on those held previously.

Candidates actively competed on their action agenda and ability. They are also serious about serving the people by bringing about more effective governance that addresses the core interests of the public in areas such as housing, livelihoods, healthcare and the economy. Gone are the candidates who want to advance their personal political agendas by undermining the government and "one country, two systems", Wong said.

Zhao Jiayin, vice-chairman of Hong Kong youth group the Hua Jing Society, said the rational, fair and orderly election is a far cry from previous polls that were often chaotic and politicized to a large degree by radical opposition.

This time, people paid more attention to livelihood and development issues, as well as the ability and quality of candidates, who no longer need to rack their brains to grab more attention by smearing rivals and launching vicious competition. They only need to fully demonstrate their expertise, agenda, contribution and sense of responsibility, Zhao said.