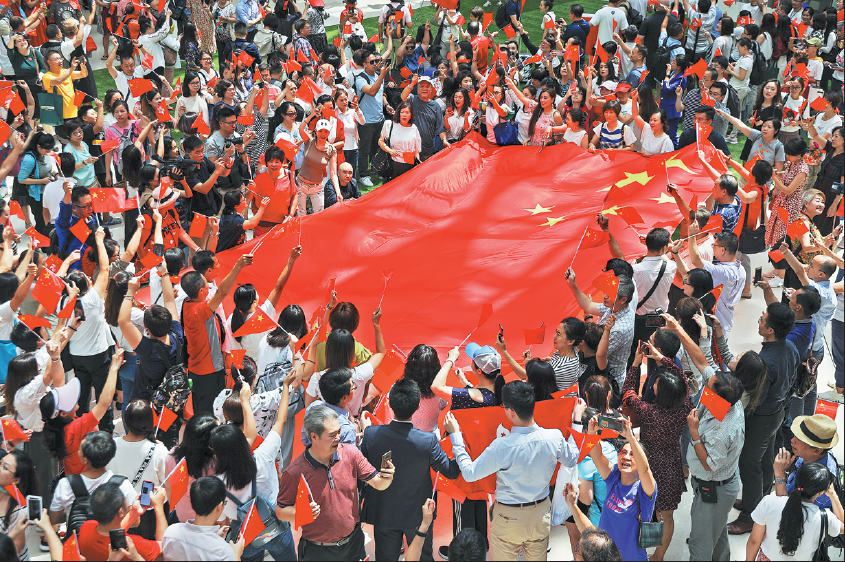 Hundreds of Hong Kong residents joined a patriotic flash mob at a shopping center in West Kowloon, singing the national anthem to show their patriotism and enduring love for the country and the city.

It was the second spontaneous performance after more than 1,000 gathered at the landmark International Finance Centre at Central on Thursday in response to an online call.

Waving the national and special administrative region flags, over 500 participants showed up at the concourse of Olympian City next to the MTR Olympic station to sing the Chinese national anthem and Ode to the Motherland — a famous patriotic folk.

Their singing won applause from spectators, who joined them in chanting encouraging slogans such as "Keep going, China" and "Keep going, HKSAR". They also chanted slogans in support of Hong Kong police and against violence.

The two patriotic events were sparked by an incident on Wednesday evening, when a 40-year-old Hong Kong teacher was assaulted and beaten by radical protesters in a mall in Kowloon Bay when he sang the national anthem to oppose their separatist rhetoric.

"The radical protesters have never listened to our voices in the past 90 days," said Tang Poon-tit, a 57-year-old resident who joined the rally with his grandson. Tang said he felt it necessary to take action to express his patriotism. He spent HK$300 ($38.30) on round-trip taxi fare to participate in the rally.

"Although our opinions are not often heard amid the prolonged social unrest, it does not mean that we are on the wrong side," he added.

A fifth-grader, for whom his parents requested anonymity for fear of school bullying, said he took part in the event to show support for the motherland as a child who "loves China and loves Hong Kong."

"I hope Hong Kong will settle down as soon as possible, and our country will not be humiliated by separatists," he said.

Amid the events, sporadic confrontations were also seen. The participants had to raise their voices and defend their position when masked and black-clad protesters showed up and attempted to interrupt. But no serious clashes happened.

Netizens said they wanted to continue the patriotic campaign. Local social media groups said a similar gathering will be held on Saturday in Kowloon Bay at the spot where the Hong Kong teacher was attacked while singing the national anthem.

Hong Kong residents display a national flag as they sing and chant slogans at a shopping mall in Tai Kok Tsui district on Friday.