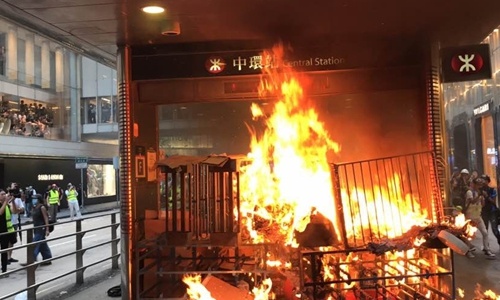 Netizens from both the Chinese mainland and the Hong Kong Special Autonomous Region (HKSAR) slammed Hong Kong activists after Hong Kong riot leaders revealed that rallies will be held in 30 countries from Friday to Sunday in support of the 12 Hong Kong suspects detained by mainland police after illegally crossing into mainland waters while trying to escape to the island of Taiwan two months earlier.

"It might be easy to defend rioters without noticing the facts," said a Hong Kong net user on Facebook.

Owen Chow, a 23-year-old Hong Kong activist, revealed through a Facebook post on Tuesday that he will take part in an online assembly held by local political organizations dubbed "Save 12 HK Youth." The online rally in Hong Kong will be held on Sunday evening, featuring guest speakers, talks between the family members of the 12 Hong Kong suspects and the host, and the screening of films related to the incident.

The organization's Facebook page was created on September 5, about two weeks after Shenzhen police arrested the suspects. The online assembly was also jointly planned by Joshua Wong, who is active on social media.

For its offline events, the organization called on citizens to take pictures with a translucent card on which is printed the picture of a speedboat, the vehicle the 12 suspects used to illegally enter mainland waters on August 23. People in Hong Kong were also asked to leave comments with the hashtag #save12, Hong Kong media reports said.

At the end of the online rally, Chow will urge Hong Kong police to make clear "if they had any role in the incident," the reports said.

"The illegal crossing is true and no evidence shows Hong Kong police have participated in the case," said a Hong Kong netizen on facebook.

"The so-called defenders of the rioters have become so wrong that they even dream of creating chaos around the world," said a mainland netizen on Sina Weibo.

Hong Kong police claimed in September that the 12 suspects were not detained in Hong Kong waters by mainland police, and that the Hong Kong Special Administrative Region (HKSAR) government will provide necessary assistance as requested by their families, Hong Kong media reports said.

Shenzhen police also said the legitimate rights of the suspects will be protected in accordance with the law.

According to information provided by the Guangdong police and a search of the marine department's traffic surveillance system and records from the marine police digital radar system, a speedboat suspected of smuggling goods left Pu Toi O in Sai Kung, New Territories of Hong Kong at about 7 am on August 23 and entered mainland waters at about 7:30 am.

An investigation revealed that the 12 suspects had boarded the speedboat as arranged by a smuggling group at Pu Toi O. One of the suspects had planned to escape to Taiwan via mainland waters in order to escape prosecution in Hong Kong.

Hong Kong police revealed that the Guangdong Coast Guard seized a ship suspected of illegally entering the waters of the city of Shenzhen, about 26 nautical miles southeast of Hong Kong waters.

Chinese Foreign Ministry spokesperson Hua Chunying said in a tweet that the 12 suspects "are not democratic activists, but elements attempting to separate Hong Kong from China."

Media reports said that at least 10 of the 12 suspects had been charged in Hong Kong with producing or possessing explosives, arson and assaulting police, and one of the group members had allegedly violated the National Security Law.