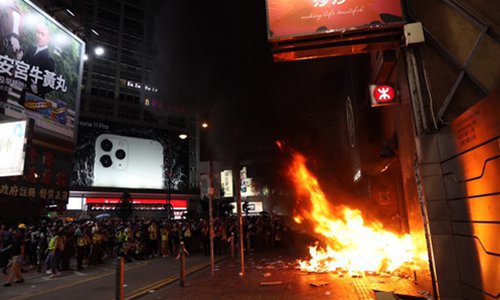 An improvised explosive device (IED) linked to a mobile phone exploded Sunday night in Kowloon, the first such case in Hong Kong, police said on Monday.

Li showed a picture of the explosion taken by a vehicle-mounted camera 8 pm about 10-15 meters from a group of police officers cleaning up barricades on Nathan Road. Nobody was injured in the explosion.

Officers found apparent bomb-making materials in the nearby shrubbery. It was a home-made bomb that could be controlled by a mobile phone, Li said, and the blast could have injured not only police but also civilians.

The explosive force of the bomb was fortunately not large enough to cause any casualties, Li said.

To create such a bomb required knowledge of chemistry and radio, he noted. The IED, the tactic as well as chemicals used  were similar to those used in terrorist attacks worldwide.

Chris Tang Ping-keung, deputy commissioner of police (operations), stressed at the conference that it was the first time for such an attack and that the blast was "2 meters away to the police vehicle."

Twelve police officers were injured over the weekend, including one whose neck was stabbed and two who had their heads attacked, police said.

The  Hong Kong Special Administrative Region government severely condemned the attacks and said police would bring those people to justice, according to a statement posted on its website on Monday.