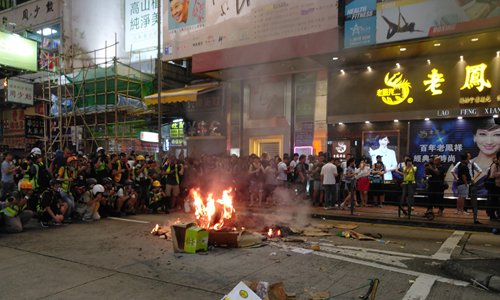 It's a city full of vitality and opportunities where people have high hopes of living a successful life. And throughout the years they have been studying and working here. It could be said that the global financial hub and Fragrant Harbor lived up to their expectations before the months-long unrests sowed the seeds of distress among them.

They are known as Hong Kong drifters, referring to people mostly hailing from the Chinese mainland who came to the city hoping to change their life for the better. They are less talked about compared with their counterparts in Beijing.  Beijing drifters mean non-locals who strive to seek a living in the capital city. But opting to become a Hong Kong drifter is, in most cases, about a more difficult mission to be fulfilled, factoring in the costly life and prevalent use of Cantonese.

A majority of those working in Hong Kong through the city's talent admission scheme work in the financial sector, some drifters working typical financial jobs told the Global Times recently.

"As far as I'm concerned, 60-70 percent of people who came here to pursue graduate studies and eventually chose to stay in the city engage in finance. Including those starting a career in the insurance sector, that could mean 90 percent," said Nick Yao, an asset manager at a local brokerage house.

Yao, from Ningbo, East China's Zhejiang Province completed his undergraduate studies in finance at a mainland university before applying for a master's degree in financial journalism at a university in Hong Kong.

He began his career in the city as a financial reporter, but it was not long before he switched to a financial job, betting that the financial sector fits better into his career development.

Higher salaries for financial professionals contribute to the switch.

Financial industry employees could earn between HK$30,000 ($3,826.26) and HK$300,000 per month, much higher than those from other sectors, whose starting salaries average only half of those in the financial sector, according to Ding Xue, an executive of a mainland securities firm's Hong Kong branch. Ding came from Wuhan, Central China's Hubei Province.

As one of the world's most vibrant financial centers, the contribution of the financial services sector to the city's GDP grew to 18 percent in 2016 from 13 percent in 2004, according to data from the Census and Statistics Department of the Government of the Hong Kong Special Administrative Region (SAR).

Climbing the ladder of success

Having built a career with a handsome salary, Yao and Ding apparently felt the taste of success.

It's even more of the case for Gary Zhao, from Hangzhou, East China's Zhejiang Province, and his wife Ms. Yuan, born in Shaoxing, Zhejiang. Under the auspices of their families, the young couple made a down payment on an apartment in Hong Kong in 2015, something even many locals can't afford.

The couple, who both work in the financial sector, acquired Hong Kong permanent residence status after more than seven years studying and working in the metropolis.

Zhao, an information technology major, pursued graduate studies in Hong Kong. And he stayed in the city after graduation. But rather than developing a career in the IT sector, he set his eyes on the financial sector, citing concerns that the development of Hong Kong's IT sector remains restrained and that the sector is dominated by Hongkongers, undercutting the competitive edge of mainlanders who can't speak fluent Cantonese.

Zhao can speak Cantonese now, albeit with an accent. His wife, having been in the city for 13 years since pursuing undergraduate studies, sounds just like locals.

Cantonese fluency is surely an indicator of levels of integration into the city, especially for those from non-Cantonese-speaking provinces and cities.

Another couple the Global Times met in Hong Kong also sounds like natives. But unlike the four financial elite who got their admission tickets into the city mostly through education, the couple made their way to Hong Kong in a more traditional way.

Leung Ming-hing came to Hong Kong with his parents from Shenzhen when he was born in 1962. The adoptive father of Leung's father provided shelter for them. Although the living conditions were much better in Hong Kong, Leung's family still had to work hard to eke out a living. He began working in a restaurant when he was 16 and has remained in the catering industry. His wife works in the tourism industry.

They have a daughter who's attending a local university and a younger son, having truly settled in the city.

Apparently, it is the prosperity of Hong Kong that has lured in many people from outside the city, although there are figures pointing to a decline in the number of people born in the mainland, Macao and Taiwan who come to live in Hong Kong.

People born in the three parts of the country made up 33.5 percent of the city's total population in 2006. The ratio shrank slightly to 31 percent in 2016, according to an article posted on local news site hk01.com in 2017.

The vast majority of the mainland-, Macao- and Taiwan-born Hongkongers came to Hong Kong before its return to the motherland in 1997, while the number of new immigrants hailing from these regions, referring to those settling in the city over the past two decades, total roughly 400,000, the article said.

The provisional estimate of the city's population stood at 7.52 million by mid-2019, according to the latest figures from the Census and Statistics Department. From mid-2018 to mid-2019, there were 44,400 one-way permit holders from the mainland.

The few drifters, some of whom have already settled in the city, the Global Times has spoken to could be considered standouts.

Still, they have faced obstacles in genuinely integrating into the local community, citing language barriers and a mind-set divide.

The riots in the past months seem to have exacerbated the issues. Failing to achieve fluency in Cantonese has become all the more concern among mainlanders coming to settle in the city, as they fear the widening rift between locals and drifters from the mainland in the wake of the protests might mean speaking Cantonese tops the agenda of studying and working there.

This is really discouraging, Yao said, sharing his discomfort about feeling estranged in an environment where some of the Cantonese speakers appear to be putting on the air.

What's more, Yao, who has been living in Hong Kong for six years, with only one year to go before getting his permanent residence status, has plans to buy an apartment in the city. The riots, though, might possibly shelve the plan, he said, venting his anger on the vandalism of radicals in Tung Chung, a transit hub close to the Hong Kong International Airport, which forced him to walk back to Tung Chung from the port of the Hong Kong-Zhuhai-Macao Bridge for more than two hours.

"If the current situation continues to worsen, I might consider opportunities in Shanghai and Shenzhen," he said, noting that he still holds faith in the city's institutional advantage for the time being.

A commuter who relies heavily on the subway -the riots centered around subway stations - Ding also said her life has been greatly impacted by the unrest.

There are no subway stations near Zhao's home and he commutes by minibuses. That means multiple acts of vandalism have not had a big impact on his life, although he said he has been under the weather because of the unrest.

Furthermore, Zhao and his wife Yuan expressed concerns over the general education in Hong Kong which they believe had worsened the unrest. When they have children, they will make a list of schools in Hong Kong that are worry-free - meaning, they don't have a tendency to influence students in a biased way.

They will filter through more than 2,000 schools across the city, according to Zhao. "If it doesn't work, [we] might just send our children to a school in Shenzhen."

Leung and his wife, for their part, are now almost jobless, as the sectors they engage in are among the most affected by the unrest. The couple, saddened by the situation, hope for an end to the turbulence soon.

"Then our lives will return to normal again."