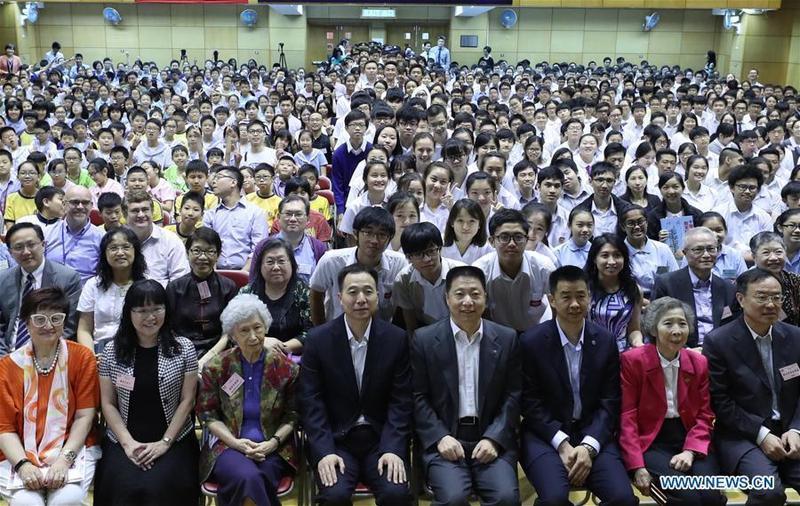 Astronauts pose for group photos with audience during a sharing session at the Chinese Foundation Secondary School in Hong Kong, June 28, 2017. Chinese astronauts Yang Liwei, Jing Haipeng and Chen Dong participated in the session to interactive with more than 800 teachers and students. (Photo: Xinhua)

HONG KONG - A veteran Hong Kong scientist welcomed a visit to the city by the nation's top aerospace scientists and engineers, a grand event which is expected to deepen cross-border scientific exchanges.

After arriving in the city on Tuesday afternoon, the delegation will stay here for five days, during which time they will hold lectures at universities and meeting with students at secondary schools in Hong Kong.

Wong Kam-fai, associate dean of the Faculty of Engineering of Chinese University of Hong Kong, told China Daily in a video interview on Monday that such exchange activities were held several times before in Hong Kong and he had never missed any of them.

Eager to have more communication with the scientists, Wong expressed sorrow that he can only sit remotely in on the activities as a normal citizen.

He is happy that amid the tight schedule on previous visits, the experts still allocated time to communicate with local students.

Besides the regular visits of mainland scientists, he hopes there can be more exchange activities for Hong Kong students to experience the charm of the subject on the Chinese mainland.

Aerospace communication between HK and mainland:

- From Oct 31, 2003, Yang Liwei, the astronaut of the Shenzhou-5 manned spacecraft, who is also China's first astronaut in space, visited Hong Kong for six days with a group of mainland scientists and space experts. His visit received a warm welcome from Hong Kong residents, many attempted to shake hands with him or asked for his autograph.

- From Nov 27-29, 2005, astronauts Fei Junlong and Nie Haisheng of Shenzhen-6 visited Hong Kong. The shared the experience of space exploration and training for the space mission with primary and secondary school students from 120 schools.

- In 2009, the Hong Kong Space Museum launched the "Young Astronaut Training Camp", which selects 30 Hong Kong students every year to visit space facilities and communicate with astronauts and experts on the mainland.