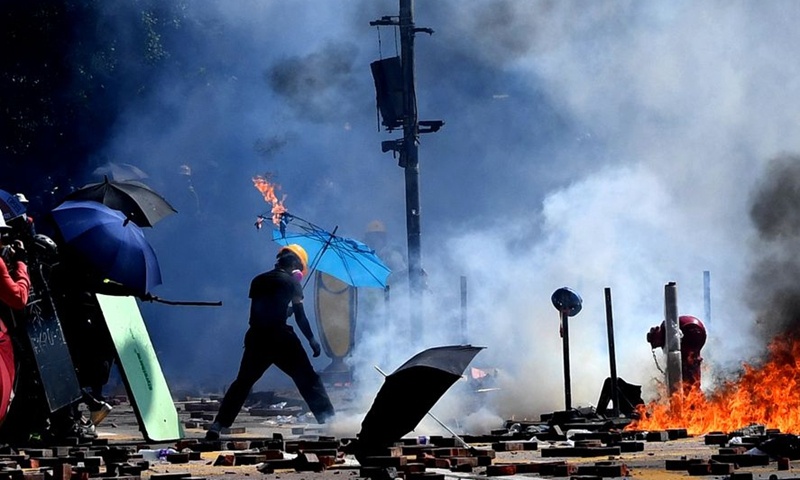 Shortly after a social media post suggested five fleeing Hong Kong secessionists were not welcome to the island of Taiwan and had been detained without permission to communicate with the outside, another 12 Hong Kong anti-government rioters who reportedly illegally crossed the border by water in August were announced on Sunday to be under criminal detention. These cases all represented a warning shot to Hong Kong secessionists who still hold illusions of escaping from justice.

The five stowaways' current situation was revealed by a Taiwan media worker Edd Jhong on social media on Saturday. Jhong claimed that he had initially helped their escape but "suggested" that Hong Kong rioters "not come to Taiwan anymore" as the Democratic Progressive Party (DPP) is "not as supportive" to them as they had thought.

Observers said Jhong's comment may crush the hopes of some Hong Kong rioters that they can flee to Taiwan and get substantial help there.

After the enactment of the national security law for Hong Kong, Taiwan seemed to be the first choice for Hong Kong rioters who dreamed to escape from justice. But  the situation of the five rioters who were detained by local authorities in the island without outside communications represents a warning shot for other Hong Kong secessionists who have similar plans, Li Xiaobing, an expert on Hong Kong, Macao and Taiwan at Nankai University in Tianjin, told the Global Times on Sunday.

Meanwhile, 12 Hong Kong residents have been put under criminal detention for illegally crossing the border and trying to escape to the island to seek "political asylum" in August, said police in Shenzhen, South China's Guangdong Province on Sunday, adding that the case is under investigation.

Hong Kong secessionists fleeing to Taiwan were likened to "a drowning man who will grasp at a straw," which is an unrealistic illusion. Especially after Taiwan refused the entry to a Hong Kong murder suspect, there have been growing divergences in the political demands of the two sides, Li said.

The five Hong Kong smugglers who arrived in Taiwan in late July were said to be cut off from connection with the outside by Mainland Affairs Council and no one knows their situation, other than a few MAC staff and coast guard members, according to Jhong.

Jhong later emphasized how little the DPP has done to "save" Hong Kong anti-government rioters and how many people in the party actually oppose "saving" Hong Kong.

"Any Hong Kong separatists seeking ways to get to Taiwan are doomed to be abandoned as the regional authorities are just being opportunistic over Hong Kong issues and will only use them as political pawns," he said.

Guangdong provincial maritime police apprehended 12 young Hong Kong residents who tried to escape to Taiwan in a speedboat on August 23. Among them, one is a member of the anti-government group "Hong Kong Story," and the person was once arrested by local police for colluding with foreign forces to endanger national security and violating the recently enacted national security law for Hong Kong.

On Saturday, the "families" of six of those seized held a press conference, asking assistance from the government of the Hong Kong Special Administrative Region (HKSAR) to bring the six suspects back to Hong Kong. They claimed that some of those arrested were not well and needed to take medicine. At the press conference, all the family members were masked.

The immigration department of the HKSAR government refuted their claims, saying that relatives of 10 suspects have been in close contact with the department for updates. Authorities in Guangdong revealed that the 12 people are all physically well and have hired lawyers from the mainland.

The press conference also aroused suspicions from Hong Kong residents, who questioned the real identities of these "families" and raised the possibility that anti-government forces in Hong Kong had hired actors to perform in order to smear the mainland.

Anti-government forces in Hong Kong, with the intention of further drawing the attention of the global community — especially the US — on the matter, are trying to pass their bias toward the judicial system of the mainland to the local people and further mislead them, according to experts.

"Local authorities process the case in accordance with China's Criminal Law, adhering to the principles of legality such as judgment on the basis of evidence and the presumption of innocence while the criminals' cases are processed on the record," Li said.