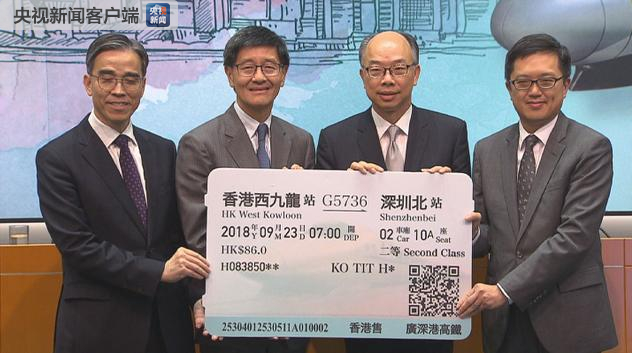 A transport official from the Hong Kong Special Administrative Region (HKSAR) government said on Thursday that the Hong Kong section of the Guangzhou-Shenzhen-Hong Kong high-speed railway will start operation on Sept. 23.

The cross-border high-speed railway will offer direct services to 44 mainland destinations, among which 38 to be long-haul destinations, Secretary for Transport and Housing of the HKSAR government Frank Chan told a press conference.

According to Chan, the first train will depart at 7 a.m. local time on Sept. 23 from Hong Kong's West Kowloon station to Shenzhenbei station, with the price of the second-class train ticket to be at 86 Hong Kong dollars (about 10.96 US dollars) for the 26-km section.

Once put into use, the railway will shorten the travel time from Hong Kong to Shenzhen to 14 minutes, and that to Beijing to less than nine hours.

The opening of the Hong Kong section enhances transport links between Hong Kong and the Chinese mainland, promotes economic and people-to-people exchanges, and not only cements Hong Kong's place as a transportation hub, but also enables the city to enjoy the opportunities brought by the construction of Guangdong-Hong Kong-Macao Greater Bay Area, said Chan.