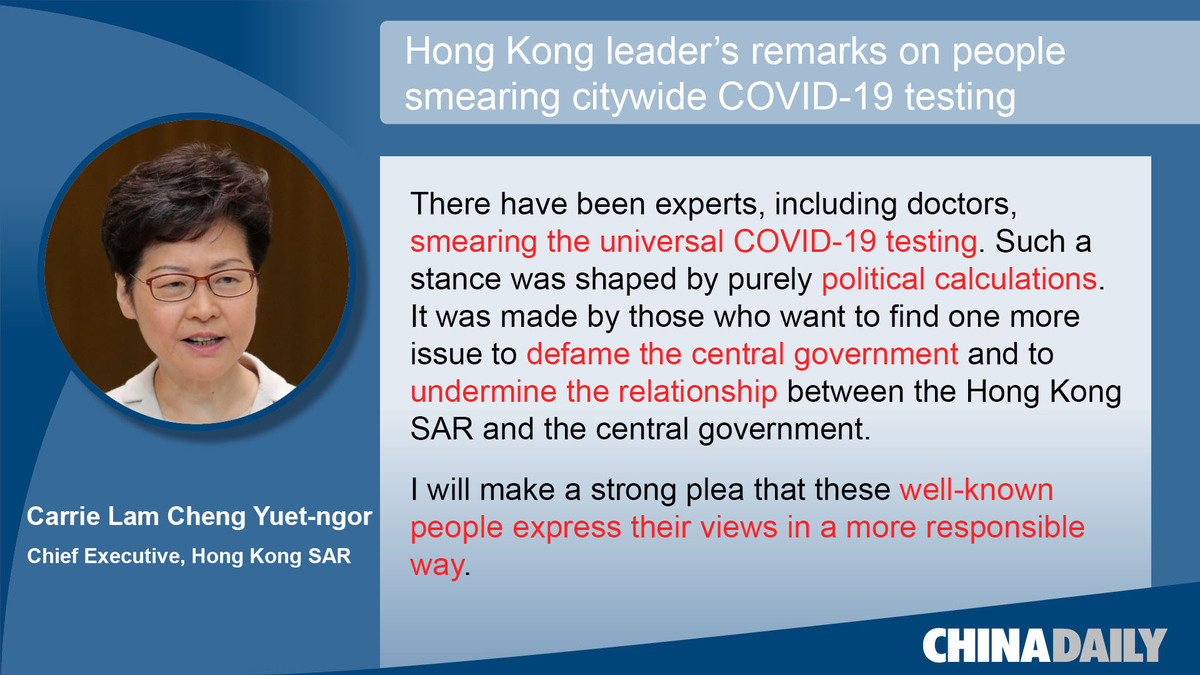 Her appeal came as the financial hub reported 19 new COVID-19 cases on Tuesday, bringing the city's infection tally to 4,710.

Three of the 19 new cases were imported while the remaining 16 were locally transmitted, according to the Center for Health Protection (CHP).

Eight local cases were related to previously confirmed cases while the sources of the remaining eight remained unknown, said Chuang Shuk-kwan, head of the CHP's Communicable Disease Branch, at a media briefing.

Speaking to reporters before the weekly Executive Council meeting on Tuesday morning, Lam said some medical experts' smearing of the testing scheme is aimed at defaming the central government and undermining the relationship between the Hong Kong Special Administrative Region and the central government.

Pointing out that large-scale virus testing has proven to be useful in combating the coronavirus globally, the CE said she has no idea why some well-known medical professionals expressed reluctance to participate in the program and asked residents not to come forward.

She stressed that the launch of the universal community testing will not affect anyway the testing capacity for other priority groups.

The CE said it was "inappropriate" and "unreasonable" that the postponement of the Legislative Council election should be linked with universal community testing, pointing out the levels of risks posed were different.

Unlike the voting, now postponed, slotted for a single day involving millions, the testing will be conducted over two weeks and an online-booking system will help regulate the flow of people queuing up to take the test, she added.

Lam also revealed that since the city's finances are currently tight, there would not be a lot of new measures that involve large public expenditure in her upcoming Policy Address.