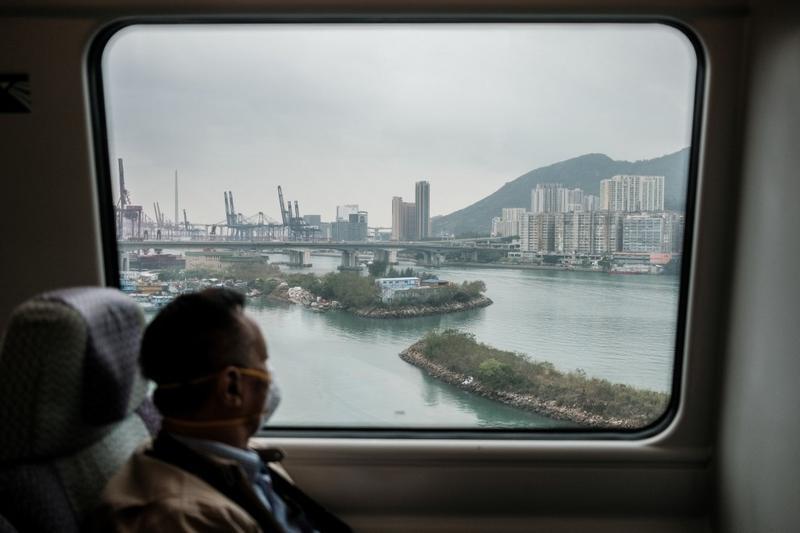 A passenger wears a face mask as a precautionary measure against the coronavirus as he travels on the city-linked train to Hong Kong's international airport on March 19, 2020. (Photo: AFP)

HONG KONG - Hong Kong recorded another 16 people infected with COVID-19 caused by a novel coronavirus, most of them linked to travel to North America and the Europe, taking the tally to 208 as of Thursday.

Under-Secretary for Food and Health Chui Tak-yi called for concerted efforts from society to ease the tremendous pressure on the city's health care system in light of the surge in imported cases.

He also asked those with symptoms detected overseas to stay where they are and avoid traveling back to the city. Starting on Thursday, all arrivals from foreign countries will be subject to mandatory 14-day home quarantine.

A total of 70 people, including 45 arrivals who showed symptoms of infection at the airport, were sent directly to public hospitals for treatment on Wednesday.

The 16 new patients include 11 men and five women aged between 19 and 51. Most of them had visited Canada, Spain, the United Kingdom, Italy, Switzerland, the United States and Germany, for travel, business or study.

One case involved a 32-year-old woman who has been pregnant for 16 weeks. She was the city's first pregnant woman to be infected with the virus.

She had been to Italy and Dubai during the incubation period, and is hospitalized in stable condition.

Two patient had no travel history during incubation period. The male patients of two cases are both 29-years-old. They both went to a gym named Pure in Lan Kwai Fong in mid-March separately.

Pure Fitness gyms at ICBC Tower, Kinwick Centre and California Tower have been disinfected, the fitness chain said in a notice on Thursday. Pure said all three gyms are now safe to use and it will continue screening members for fever.

Meanwhile, the patients of three confirmed cases and one preliminarily case on Wednesday had no recent travel records but they all have visited bars and restaurants in Lan Kwai Fong.

The health authorities suspected that there were virus transmission in the establishments they visited in Lan Kwai Fong, and advised the managements to have the premises sterilized.

Head of the Communicable Disease Branch of the CHP, Chuang Shuk-kwan, warned that the risk of virus transmission at dinner and drink gatherings was high.

She urged the public, especially younger people, to avoid visiting bars and restaurants as the risk of community outbreak has been greatly heightened by the sharp increase in imported cases.

Also on Thursday, Hong Kong's Centre for Health Protection (CHP) announced that it would offer free virus tests to arrivals who are aged 65 or above and those who are living with elderly relatives. The eligible persons will be given containers to collect their deep throat saliva samples and return the samples to the CHP's 13 clinics. If they are not informed about their results within three working days after submitting the samples, they can take it that the results are negative, according to a statement.

As of Thursday, three more persons suffering from COVID-19 were discharged after recovery, taking the total number of discharged patients to 97.