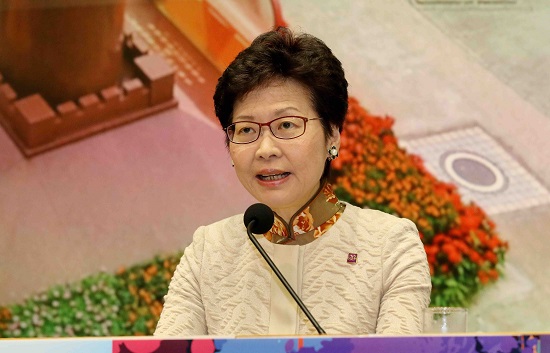 HONG KONG, June 24 (Xinhua) -- Hong Kong will continue to be an ideal place for multinational companies to thrive after the law on safeguarding national security in the Hong Kong Special Administrative Region (HKSAR) is enacted, HKSAR Chief Executive Carrie Lam said on Tuesday.

"For many multinational companies which have presence in Hong Kong, I believe that your key concern would be whether Hong Kong will continue to be the ideal place for your companies to thrive. To this, my response would be a resounding 'yes'," Lam said at an online briefing session of the China Development Forum.

The legislation only targets acts of secession, subversion of state power, terrorist activities, and collusion with foreign or external forces to endanger national security, Lam noted. "Obviously these are not acts and activities that law-abiding companies or citizens will be engaged in."

"The vast majority of people, including the law-abiding multinational companies, should welcome the return of stability and law and order which have made Hong Kong one of the world's safest cities for many years," she said.

The National People's Congress (NPC), China's top legislature, has made it clear in its decision and relevant explanatory statement that the legislation will be guided by a number of fundamental principles, including firmly safeguarding national security, upholding and improving "one country, two systems", adhering to governing Hong Kong in accordance with the law, resolutely opposing external interference and substantially safeguarding the legitimate rights and interests of Hong Kong residents.

"These fundamental principles are clearly enshrined in the proposed legislation which embraced important legal concepts as well as the protection of the legitimate rights and freedoms of individuals," Lam pointed out.

"Enactment of national security legislation will not change the high degree of autonomy enjoyed by the HKSAR; it will have no impact on the HKSAR's judicial independence, including that of final adjudication as enshrined in the Basic Law. I believe that both businesses and Hong Kong people should find these provisions re-assuring," she added.

"Hong Kong continues to thrive as an international financial center, and as a gateway between the mainland and the world," she said.

Since the NPC adopted the decision on the legislation, the HKSAR government has been fending off quite a lot of unfair criticisms against it, including from some foreign governments, the chief executive said. "My observations on those behaviors could be summed up by two terms - double standards and hypocrisy."

On double standards, all those countries which have pointed their fingers at China have their own national security legislation in place, and their governments have been using national security reasons to justify many of their awkward acts and decisions, Lam said. "Hong Kong is an inalienable part of the People's Republic of China and why would China be inhibited from enacting legislation to protect its own soil and its own nationals?"

On hypocrisy, vocal remarks have been heard about granting citizenship to Hong Kong residents or threatening sanctions against Hong Kong, she said. "We await the likely outcome of these gesturing rhetoric when their own people or domestic politics render those acts unpopular at home."

The chief executive said Hong Kong is not worried by such unilateral threat of sanction. "Hong Kong will continue to rely on her fundamental strengths of the rule of law, independence of the judiciary, free and open trade policy, level playing field, free flow of capital, etc."

"Hong Kong will remain a welcoming, resilient and competitive global economy, playing an irreplaceable role in bringing international and mainland markets and companies together," she said.

Further to the fundamental strengths, Hong Kong continues to enjoy its unique advantages brought about by the continuous opening up of the mainland economy, and its active participation in major national initiatives including the Belt and Road Initiative and the Guangdong-Hong Kong-Macao Greater Bay Area, Lam pointed out.

"So Hong Kong does have a lot of opportunities going forward. What we need most now is for the society to get back to normal," she added.

The chief executive emphasized that Hong Kong is determined to conquer the political, social and epidemiological crises that have so harmed its economy and shaken the community over the past year.

The national security law is an anti-virus software and a beacon of hope, said the chief executive, adding that it will guide Hong Kong to a better future and restore its glory as the Pearl of the East, a proud special administrative region of China.