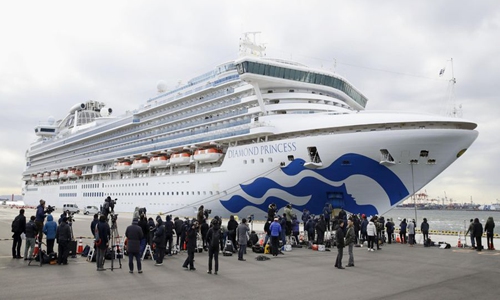 Photo taken on Feb. 6, 2020 shows the "Diamond Princess", a cruise ship which has been kept in quarantine, waiting for supplies at the port of Yokohama in Japan. (Photo: Xinhua)

China's Hong Kong and Taiwan are bringing back all their residents from a quarantined cruise ship in Japan after 621 people on board have been infected with the COVID-19.

The Global Times confirmed with some Hong Kong passengers that they, as scheduled, disembarked from the ship Diamond Princess on Wednesday.

The Hong Kong Special Administrative Region government announced on Tuesday that they have sent a second batch of 36 officers to bring back residents on the ship after a 30-member team arrived in Japan to make arrangements.

The government demanded that the Japanese side arrange for Hong Kong passengers who tested negative for COVID-19 to leave the ship on Wednesday, and provide information of residents on board who had close contact with confirmed cases and subject to an extended quarantine period, the government announcement said.

Returning Hong Kong passengers were advised to stay at the quarantine center in order to minimize the health risks to their families and the community, the government noted.

There were 352 Hong Kong residents on board and 50 confirmed infections as of Tuesday.

Taiwan island's deputy representative to Japan is making arrangements to send their residents on the ship back to Taiwan, Taiwan media reported.

The residents would stay at a hotel before taking a chartered plane back to Taiwan. They will be quarantined at a hospital for 14 days and transferred to an epidemic examination station if tested negative for the virus twice.

Five of the 24 Taiwan residents on board have tested positive for the virus as of Tuesday, Taiwan media said.

On Wednesday, another 79 people on board were tested positive for the novel coronavirus, taking the total number to 621 and about one sixth of all people on board, according to the Japanese Ministry of Health, Labor and Welfare.

The Japanese government has sent infectious disease professionals and psychological counselors to the ship, the Japanese Ministry of Health, Labor and Welfare told the Global Times on Wednesday, denying infectious disease expert Kentaro Iwata's accusation in a video that said the ministry failed to send professionals to help control the epidemic on the ship and led to the spread of the virus and the loss of timely treatment opportunities.

Iwata published the video on Tuesday after entering the ship.

The ministry noted that most people on board would go back home after disembarking; some people who had close contact with the patients would stay at facilities arranged by the Japanese government for a 14-day quarantine and go home if they test negative for the virus afterwards.

Japan is taking active moves against the epidemic and large-scale infections are unlikely to happen in the country, said the ministry.

A Japanese passenger, who gave his name as Daxa, told the Global Times on Wednesday that he is still on the ship waiting for the test results.

Daxa said he cannot get off the ship on Wednesday, but he did not feel worried as he believes he was not infected. With 24,400 followers on Twitter, he updates his life on the ship on the platform.

Daxa said the only thing that bothered him is the slow process to return home.

The ship, which has 3,711 passengers and staff on board and arrived at the port of Yokohama in Japan on February 3, has been kept in quarantine after a passenger from Hong Kong was found to be infected with the virus.

According to a report by Japanese media outlet NHK on Wednesday, about 500 passengers would disembark on Wednesday, and the rest are scheduled to leave on Friday.

Japan has reported 694 infections by Wednesday, making it the country with the largest number of infections outside China.