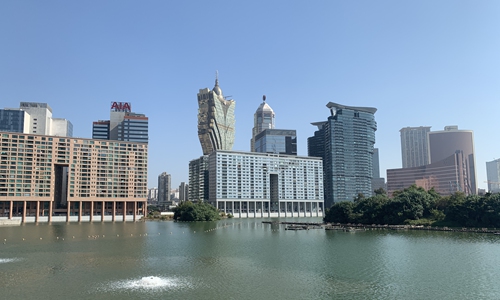 The first, current, and incoming chief executives of the Macao Special Administrative Region (SAR), the Hong Kong SAR's neighbor which also implements the "one country, two systems" principle, consider safeguarding stability as the foundation for the city's development and prosperity, and the lingering social unrest in Hong Kong could serve as a warning shot for Macao.

Meanwhile, the patriotic sentiment of Macao people helps set an example of how to apply the principle.

Edmund Ho Hau-wah, the first chief executive of the Macao SAR government, said in a recent interview he still remembers that when Macao returned to the motherland in 1999, the city had experienced a challenging period as the unemployment rate was relatively high, local economic growth was sluggish and the city faced public safety issues. Over the past 20 years, Macao has been growing into one of the wealthiest cities with improving social welfare and livelihood, mainly thanks to the firm support of the central government as well as close cooperation with the mainland, he said.

Ho, who is also the vice-chairman of the National Committee of the Chinese People's Political Consultative Conference (CPPCC), said the central government has highly praised the practice of the pioneering "one country, two systems" in Macao, and some experiences of applying the principle could be offered to other places.

"Since the beginning, we included 'love country, love Macao' into our core values, urging Macao people to learn the Chinese Constitution and the Basic Law of the Macao progressively and comprehensively. It helped shape a correct understanding of the country," Ho said.

In addition, patriotic education is an indispensable part of fundamental education in Macao, particularly for the youth, the former chief executive noted. "Such a tradition of cultivating the patriotic spirit has been passed on generation after generation. And it's widely understood that the destiny of Macao is closely related to the future of the mainland," he said.

Located at the southeastern coast of China, Macao and Hong Kong have many things in common. They returned to the mainland in the late 1990s, maintaining their previous lifestyles, an independent judiciary, and administrative systems under the "one country, two systems" principle. While people in Macao have paid close attention to months of anti-government protests in the neighboring city, some observers raised questions about whether the social unrest would spread to Macao, whether Macao would follow the footsteps of Hong Kong, and whether the turmoil in Hong Kong has cast a shadow over the implementation of the principle.

Ho Iat Seng, incoming chief executive of Macao SAR government, said in a recent interview that the Hong Kong issue could be compared to a hurricane. Although the storm might be huge, it would eventually pass, and what happened in Hong Kong could be a warning shot for Macao, Ho noted.

Ho won the chief executive election with 392 out of 400 valid votes on August 25 and will assume office on December 20, which will also mark the 20th anniversary of Macao's return to the motherland.

"'One country, two systems' is a new thing… Hong Kong implemented it a few years ahead of Macao, and we've been both exploring how to move it forward," he told the Global Times in a recent interview.

Ho attributed Macao's success in applying the principle to its"patriotic gene" in fundamental education, social organizations, and administrative institutions. "For example, the majority of elected members to the Legislative Assembly are patriotic, come up with different suggestions to supervise governance, but not to stage anti-government scenarios," he said.

The passage of Article 23 of the Basic Law and amendment of the laws on the national flag, national emblem and the national anthem also helped create positive synergy between the high degree of autonomy and the governance of the central government over Macao, observers and local officials said.

Over the past 20 years, Macao has been experiencing its best development, as various economic indicators showed a growth momentum, Fernando Chui Sai On, the current chief executive of Macao SAR government, said in a recent interview.

As a major casino town, Macao's economic performance has been largely fueled by its gambling and tourism sector. However, sluggish growth in gambling spending and falling levels of investment would drag the city's economy in 2019, research firm EIU Analysis said.

The local leaders also feel the urgency to diversify its economy, as relying on a single industry would mean huge risks while continuing to improve people's livelihood would also help guarantee Macao's long-term stability.

"Over the past two decades, Macao people have been enjoying better health care, education, and pension funds, and the government also provides certain guarantees to low-income families," Ho said, noting that his future work will focus on amplifying those advantages and safeguarding social stability.

On Hong Kong's social unrest, some Macao residents said they were concerned that whether Macao would experience the same disorder one day since young people in Macao could be influenced by their peers in Hong Kong.

"When I was campaigning, many residents told me that 'There can't be social unrest in Macao.' It's a question of striking a balance between rights and responsibilities, and we need to reflect on that," Ho said in an earlier interview.

For top officials, Macao's future has been and will always be dependent on the mainland. For Chui, the most unforgettable memories were of the central government not only providing medical support to Macao during the SARS outbreak in 2003, but also approving the Individual Visit Scheme to help the local economy. And when Typhoon Hato hit Macao in 2017 and caused huge damage, soldiers from the People's Liberation Army (PLA) Garrison in Macao helped in disaster relief work day and night.

"The love and care for mainland compatriots are from the bottom of our hearts," he said, noting that "the one country" of "one country, two systems" is our strong backbone, and such close ties with the mainland have been shaped for a very long time.