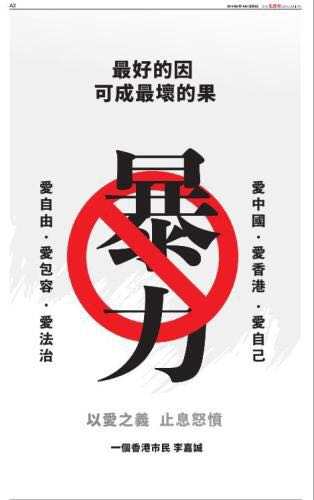 The statement in Hong Kong's Wenhui Daily has an icon against violence in the middle, with the words "love China, love Hong Kong, love yourself" on the right and "love freedom, love tolerance, love the rule of law" on the left. A slogan says "ease anger with the righteousness of love" and was signed by "a Hong Kong resident, Li Ka-shing".

Li, the wealthiest person in Hong Kong who started his career in the 1950s as a plastic flower manufacturer, gradually built a global conglomerate covering real estate, infrastructure, ports and telecommunications.

In a joint statement on Thursday, 16 property developers, including two of Hong Kong's richest men, Li and Lee Shau-kee, condemned the citywide violence committed by radical protesters that disrupted people's daily lives and brought hardship to many businesses.

(With inputs from CGTN and China Daily; Compiled by He Jieqiong)