HK unites in fight against poverty 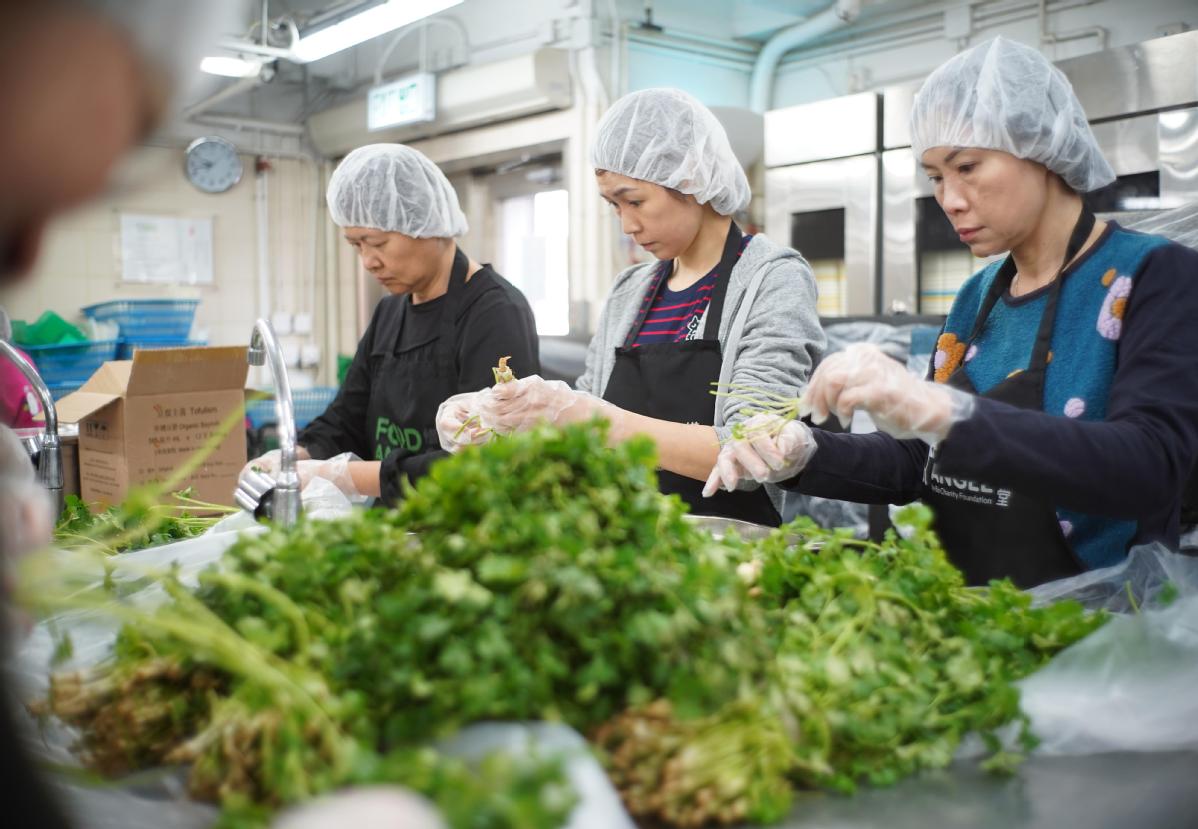 Action taken in city to help seniors and children

Three years ago, a woman in Hong Kong surnamed Lo was malnourished and could not afford to buy food.

She lives alone in a 5-square-meter closet, known as a subdivided flat, in Sham Shui Po, one of the oldest and poorest neighborhoods in the special administrative region.

Before Lo, 77, learned about Food Angel-a meals program-three years ago, she was as thin as a rake. When she could, she tried to supplement her starvation diet by lining up for free food packs handed out by a few NGOs and some restaurants. At other times she cooked simple meals such as salted fish and vegetables for herself in her tiny apartment.

Today, Lo receives two free, nutritious meals every day at Food Angel's community center in Sham Shui Po. On the day she was interviewed, braised pig trotters were on the lunch menu.

A contented Lo said, "I have gained weight since I began having the meals here."

The meals have also helped ease her financial burden. The HK$3,500($446) monthly Comprehensive Social Security Assistance payment she receives from the Hong Kong government does not go very far. More than half-HK$1,900-goes for rent and utility bills, and the rest is spent on basic essentials, including medications and transportation.

Lo's eyesight is poor, as she has cataracts. With two free meals a day, she is able to save a small amount of money to see a doctor. Occasionally she can afford to buy clothes.

Founded in 2011, Food Angel, a program run by the Bo Charity Foundation, turns edible surplus food from supermarkets, restaurants and hotel kitchens into meals. The meals, which are balanced for nutritional value, go to grassroots elderly people and other low-income households in the city Monday through Friday.

In the past seven years, Food Angel has prepared more than 6 million hot meals and food packages for people in need.

"Most of it is packed into recoverable boxes and delivered to social welfare organizations, homes for the aged and schools, while a small number of elderly people have their meals at our community center," he said.

Daily life in Hong Kong produces mountains of edible surplus food, most of which is dumped into landfills as waste. As an alternative, Food Angel collects and recycles food which would otherwise be destined for these dumps.

Most of it comprises fresh vegetables and raw meat, and is donated by some 300 supermarkets, wet markets, restaurants and hotels.

After the food is taken to the Food Angel base in Lai Chi Kok, staff members and volunteers trim yellowing leaves off vegetables, then wash and chop the food before it is taken in trucks to two kitchens, where it is transformed into hot meals. 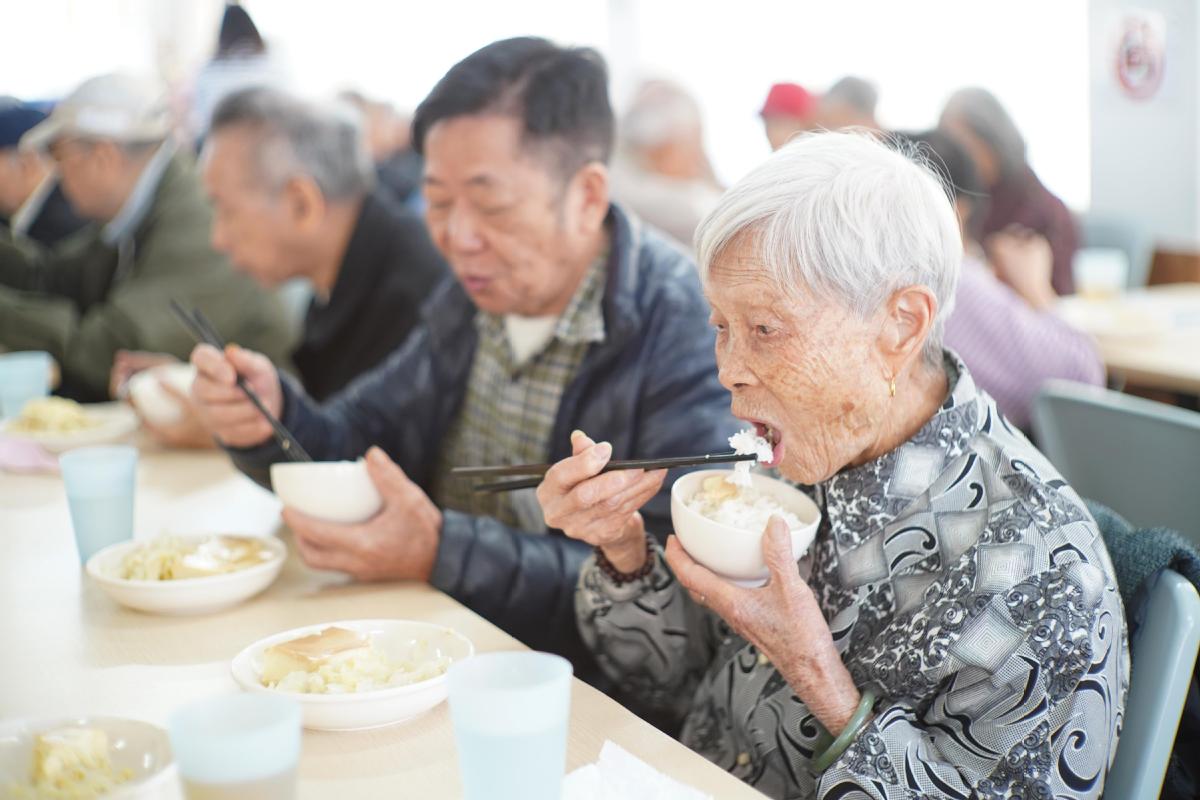 Most beneficiaries of the program are impoverished elderly, a group that is the fastest-growing in the city and has the highest poverty rate.

In 2017, the Hong Kong Poverty Situation Report said the poverty rate among people age 65 and older was 44.4 percent. Of every 10 seniors in Hong Kong, nearly half live below the poverty line.

By that time, one in three citizens in the city will be elderly.

Wong Mei-yee, a registered social worker and the center's service manager, said it has almost 400 elderly members, and about half are ages 75 to 85.

Most of them live alone in nearby public rental housing or subdivided flats. They try to survive on the old-age allowance or on Comprehensive Social Security Assistance provided by the government.

"We hope meals and other free services at the center, such as haircuts and celebrating birthdays, relieve the financial pressure and create a platform for them (seniors) to stay connected to the outside world," Wong said.

Lau Yuen, 78, walks 10 minutes from his public rental apartment to the community center each day to have two free meals.

He has severe arthritis, but is spared from walking to a nearby market, buying food and then cooking for himself.

He saves enough money from eating for free to travel to Guangzhou, capital of Guangdong province, for specialist treatment on his legs every three months.

"It allows older people to keep smiling through their twilight years," Lau said. 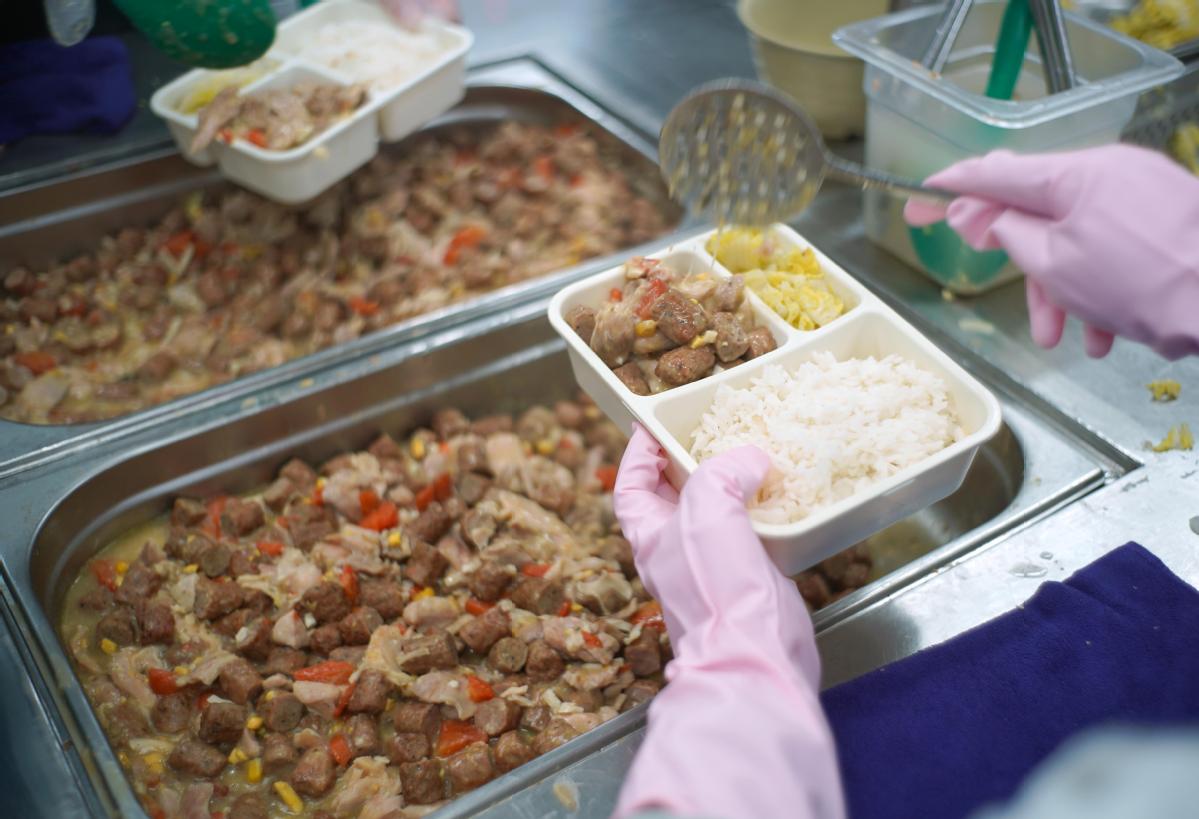 He brought rice and fresh fruit for the people and announced a HK$10 million donation to Food Angel from the Li Ka Shing Foundation.

"If Food Angel has opportunities to expand its services, the foundation must continue to support its programs," Li said.

Chow, the Food Angel senior manager, has witnessed it grow slowly from a small-scale charity program, virtually unknown to the public, into an institution. The group served only 30 meals a day at the start. Now, it serves 8,000.

The program is aiming for its services to reach all five of Hong Kong's poorest districts. "We are attempting to collaborate with more suppliers, charity organizations and to expand services to more areas," Chow said.

Its third kitchen, in Kwun Tong, will begin operating in the second quarter of this year, and will be the largest of the three.

However, human resources are in short supply, and Chow is appealing for more volunteers. They not only help to alleviate poverty among older people, but also assist in protecting the environment.

More than 1.37 million residents are living below the poverty line in Hong Kong.

Some 233,600 children in the city-20.3 percent of the young population-are living below the poverty line, according to the latest Poverty Situation Report.

Local NGOs are helping; while some focus on the elderly, others are doing all they can to help these children.

Ng Yee, (a pseudonym), is one of those underprivileged youngsters. Ng's father, the family's sole breadwinner, only earns about HK$10,000 a month to support the 12-year-old, her stay-at-home mother and two younger brothers. Some 40 percent of that HK$10,000 is spent on rent on a public housing estate in Kwai Chung, New Territories.

The family is covered under the Comprehensive Social Security Assistance Scheme. Managed by the Hong Kong Social Welfare Department, CSSA provides a financial safety net for basic needs, with eligible applicants receiving monthly cash allowances of HK$2,455 to HK$6,355, based on need.

Ng's mother said: "I want my children to do well at school. If they are good at their studies, their chances of social mobility are higher."

These views are shared by Lam, the chief executive, and educators and social workers. 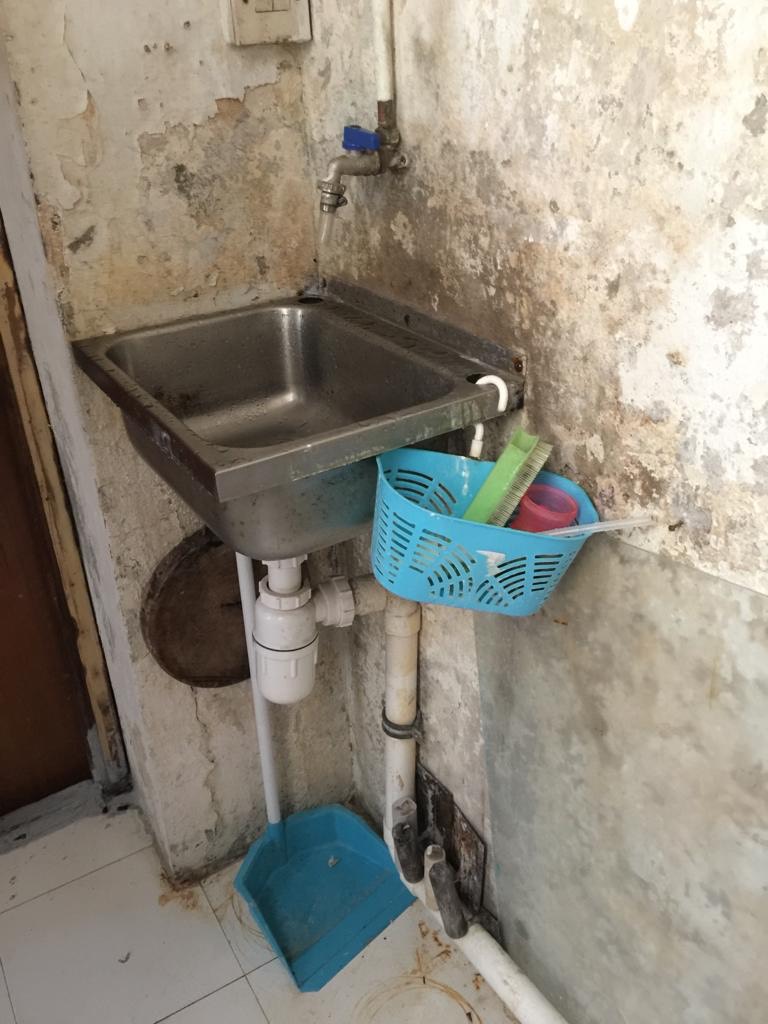 "Education is a powerful tool to address many of the world's most daunting problems," she said, while delivering a speech at an educational awards presentation.

However, the addition of more money for education has not been enough to meet the needs of underprivileged families.

The Society for Community Organization, a Hong Kong nonprofit organization, interviewed 157 children ages 3 to 18 from the city's low-income families in June last year. It found that half were from families too poor to pay for after-school tutoring and classes to help with homework. However, 80 percent said they needed the extra help.

Sze Lai-shan, SoCo's community organizer, said: "They want to keep pace with their schools' programs, especially English. Teachers are too busy to help them and their parents are not able to help either."

Ng's father works on the Chinese mainland, and comes home on weekends. The girl's mother has a diploma from a mainland vocational institute, and does her best to help the children with their homework.

The mother is best at Chinese and mathematics, but her English is poor. That only heightens Ng's problems at school, as she has failed all her English tests.

Ng's teachers are too busy to help, her mother said, as they have heavy workloads, including course planning, preparation and assessment. On top of this, they are assigned administrative duties. In 2000, teachers said this administrative work comprised 30 percent of their working hours, according to a survey by the Hong Kong Federation of Education Workers.

The federation interviewed 264 local teachers in November 2017 and found that the situation had not changed, with administrative work continuing to eat into teaching time.

Ng's mother wishes she could afford private tutoring to spare her daughter from being labeled an underachiever. But the HK$120-per-hour cost is beyond her reach.

The SoCo survey found the monthly cost of after-school classes is about HK$819, some 7.7 percent of an impoverished family's typical monthly income. Sze said that is enough to buy food for a poor family for 10 days.

On Sundays at 10 am, the sixth-grade student goes to a fast-food restaurant in a nearby shopping mall, where her tutor, 22-year-old Kelvin Lam Ka-wang, is waiting to give her an hour of free lessons.

Chan Hung, the founder of Principal Chan, established the charity in April 2011, giving up a HK$100,000 monthly salary as a secondary school principal. 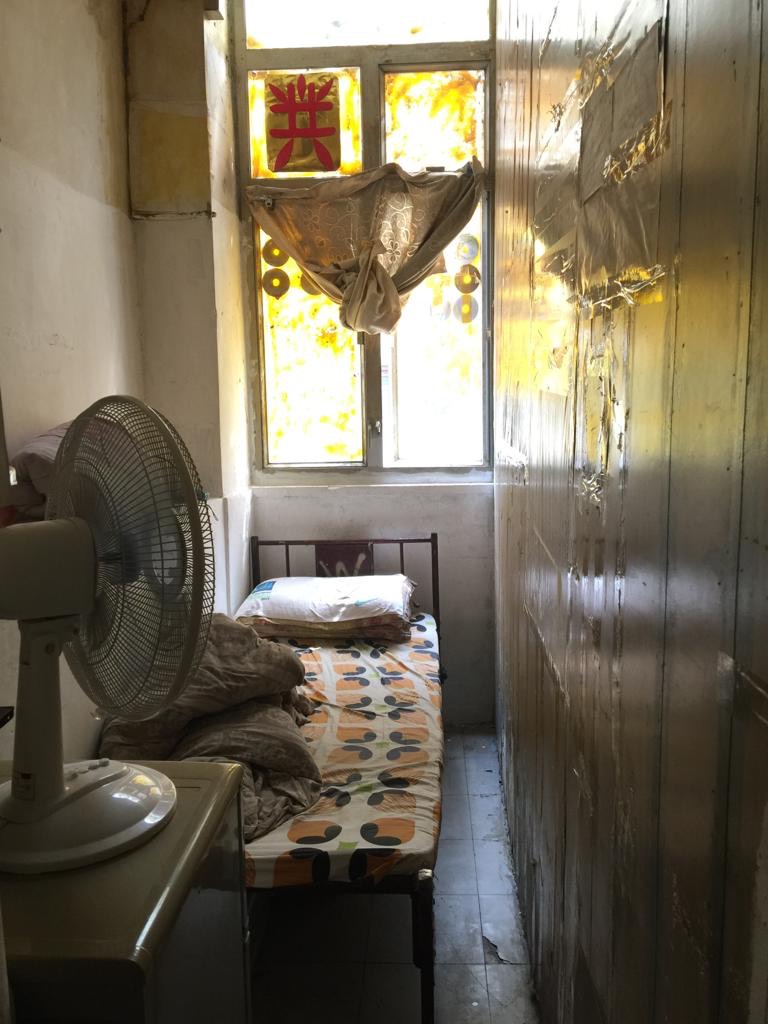 "Children who are impoverished and poor in their studies are often neglected by the education system. They are often lost, having no clue and feeling abandoned. I want to give them a hand," Chan said.

Once a week, volunteer teachers give one-hour one-on-one tutorials to students at fast food restaurants, community centers and other public areas near the teachers' and students' homes.

Ng and her tutor spend 15 minutes going over her homework. The rest of the time is spent studying English.

"The topic sentence is often the first sentence of a paragraph. Usually, it is the summary of the whole paragraph," Lam told Ng. The girl used a marker pen to underscore such sentences, and got two correct.

She has been under Lam's guidance for more than a year, and her grade has risen from D to C

Ng presented Lam with a card she had drawn in crayon, showing a house, with herself and the tutor holding hands. The Chinese characters for "thank you" were inscribed on the card.

Chan, 51, said: "We want to give hope to poor students. We want them to learn that they are not stuck, or being neglected. We want them to see there is a road leading forward, and there are people to accompany them." He now manages two centers that provide tutoring to underprivileged children.

Patience and a willingness to commit to at least three months' service are required of volunteer teachers. The level of schooling is a secondary consideration-apart from the stipulation that volunteers must have completed senior secondary education, or higher.

Chan repeatedly tells volunteer teachers they are under no pressure to produce remarkable academic progress in their students.

"Free tutorials are remedial, rather than for enhancement. Therefore, the most important thing is that the volunteers should let the students think they are capable of handling their studies and, further, their lives," he said.

Up to January, pairings of volunteer teachers and students had reached 12,441. Still, some 3,000 students have applied for the service, but no volunteers are available to help them.

Chan's goal for this year is to hold a fundraiser in the hope of collecting HK$400,000. That would go toward hiring more staff members to do the behind-the-scenes work of matching students with volunteer teachers. It would also be used to promote the service and "spread the word" in the hope more volunteers would come forward.

Beating poverty is a community effort. No single agency or entity is capable of turning the tide. Taking an optimistic view, there is hope, as Hong Kong is a city that takes pride in its warmhearted people.