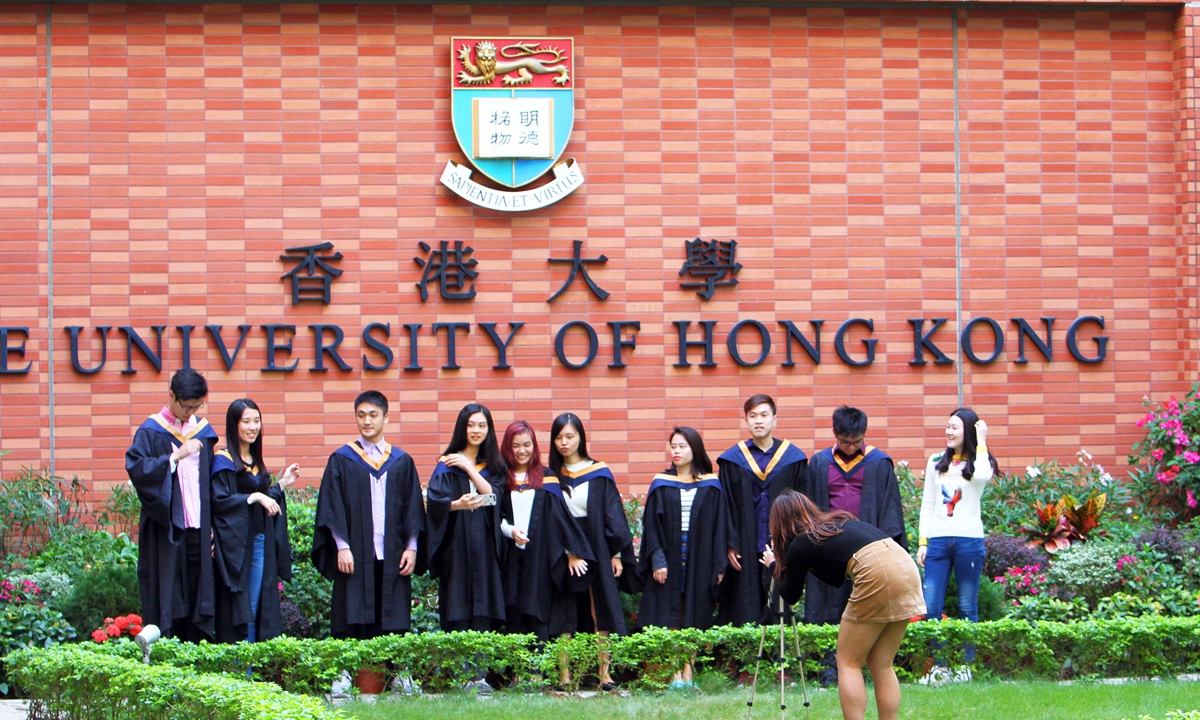 Graduates from University of Hong Kong pose for a picture. (File photo: VCG)

The employment rate of bachelor's degree graduates in 2020 from the University of Hong Kong has reached the lowest in 10 years, with only 75.1 percent employed while 21.3 percent doing further studies, according to a latest survey from the university's Centre of Development and Resources for Students.

All 3,662 full-time graduates were surveyed in the form of a questionnaire from October 2020 to March this year. A total of 3,219 graduates replied, a response rate of 87.9 percent.

Commerce and industry sector continued to be the largest employment sector, with 50.3 percent of students engaged in it despite a drop of 3.6 percentage points compared to 2019, followed by community, social and personal services sector (21.3%), according to the survey.

The University of Hong Kong is not the only one facing the situation. Hong Kong's University Grants Committee (UGC) said in its 2019-20 annual report that this year was extremely challenging for Hong Kong, and the higher education sector was "no exception." The social unrest and the COVID-19 pandemic brought negative impact to teaching and research activities across all universities in Hong Kong. UGC is an organization overseeing the city's publicly funded universities.

The low employment of university students was related to several factors such as the "impact of the pandemic" as well as the slow economy, Lin Jiang, a professor of economics at Lingnan University College of Guangzhou-based Sun Yat-sen University, told the Global Times on Sunday. Lin added that some graduates have high salary expectations so they are reluctant to take a job they are not satisfied with.

Also, the high-tech industries in Hong Kong developed relatively slower than other hot industries such as finance and real estate, Lin said. "More high-tech enterprises in the city should be encouraged to recruit more graduates."

The central and local governments have been making efforts to woo talents from Hong Kong to work for the Guangdong-Hong Kong-Macao Greater Bay Area as a way to boost the region's development and to maintain social stability.

The Hong Kong Special Administrative Region government launched Greater Bay Area (GBA) Youth Employment Scheme on January 8 this year. Under the scheme, enterprises with operations in both Hong Kong and other GBA mainland cities can join the plan to offer job vacancies. The SAR government will grant an allowance of HK$10,000 ($1,285.8) to firms each month for each graduate employed for up to 18 months.

If the mechanism can be improved gradually to solve problems that Hong Kong graduates are confronted with, such as social security and housing issues, this would be a good trend, Lin noted.