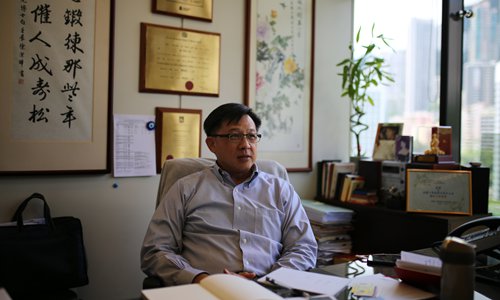 Rioters also stalled the vehicle transporting Patrick Nip Tak-kuen, Secretary for Constitutional and Mainland Affairs after he left a ceremony on Sunday. Nip exited the scene after riot police arrived and resumed took control of the area.

"We urge the Chief Executive to end the violence and crackdown on the riots," Ho said, noting the government should enforce the Emergency Regulation Ordinance under the Basic Law,  prohibiting rioters from assaulting officials, police, and citizens.

Unruly demonstrators covered themselves with black clothing and attire to prevent from being identified by authorities.

HK police confirmed that fake journalists were at riot locations helping protestors escape by stalling security units, rather than legitimate reporters covering the events as the unfolded.

Ho has also called for the law to include banning fraudulent reporters.

He asked the government to introduce a law that would prohibit protesters from using secessionist slogans during the demonstrations, which is a violation of Hong Kong's mini-constitution Basic Law.