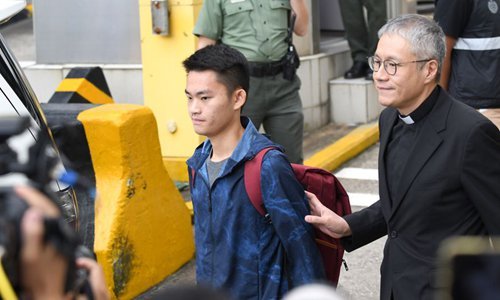 This photo shows Chan Tong-Kai, suspect of a homicide case in China's Taiwan, is released on Oct. 23, 2019  from a prison in Hong Kong. (Photo: Xinhua/Lu Hanxin)

One year after Hong Kong murder suspect Chan Tong-kai, whose case led to the proposed extradition bill that sparked months of social unrest in Hong Kong last year, was released from prison for money laundering, he still has not been able to get a visa to Taiwan to surrender.

The Security Bureau of the Hong Kong Special Administrative Region on Friday urged the Taiwan island authority to grant Chan's entry, saying "the first step to resolving the matter is for the Taiwan authority to allow Chan to enter, which is in Taiwan's hands," a bureau statement said.

As long as Chan is granted entry, even if it is approved in principle, the Taiwan police authority can notify the Hong Kong police, and the police units of both sides can immediately plan his trip arrangements, the bureau said.

It is not that Chan is unwilling to return to Taiwan, but "there is just no way to get a visa yet, which is why he can't leave for Taiwan," Peter Koon Ho-ming, provincial secretary general of the Anglican church in Hong Kong, told the Global Times on Friday, adding that Chan was also frustrated.

Chan has not changed his intention to turn himself in to Taiwan, and his lawyers have been negotiating with related authorities for his return, Koon said.

Friday marks one year since Chan was released from a Hong Kong prison for money laundering. Chan killed his girlfriend in Taipei in 2018 and escaped to Hong Kong, where he could not be charged with murder. As there is no extradition agreement between Hong Kong and Taiwan, Chan could not be sent back to Taiwan.