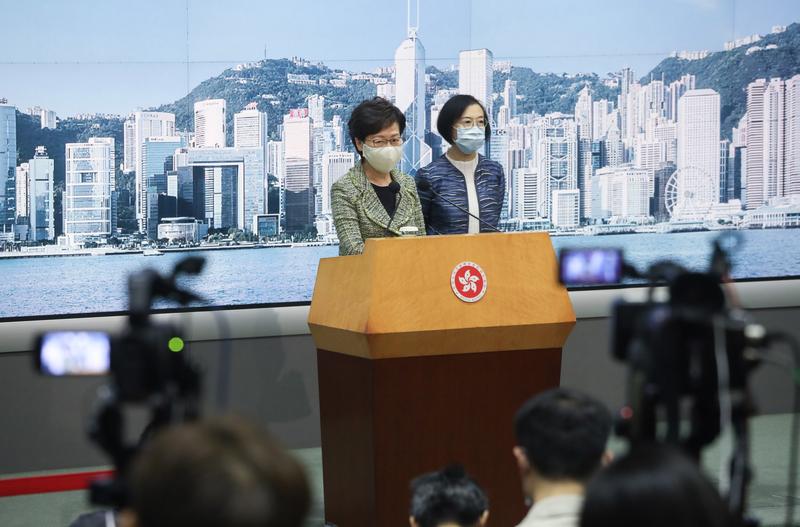 HONG KONG – Chief Executive Carrie Lam Cheng Yuet-ngor announced Tuesday that Hong Kong's current social-distancing measures, set to expire on Thursday, will remain in place for another week, as the government "did not have much confidence" after the sources of three local infections over the past week remained untraced.

Meeting reporters before an Executive Council meeting, Lam also said kindergarten, primary and secondary school teachers, as well as dormitory staff of local special schools, will be tested for the coronavirus in phases starting next week, as a precautionary measure to ward off outbreaks at schools.

Lam also said that in order to facilitate cross-boundary travel and to set up "travel bubbles", four privately-run community testing centers will start operations in mid-November. As such, Hong Kong residents will need to pay only HK$240 (US$31) for a test — much lower than what charged previously.

Those with negative test results can furnish the same as proof of good health while traveling across the border, Lam said.

A contact-tracing cellphone app "Leave Home Safe" will be launched in the middle of November, said Lam, who also urged restaurants, theaters and fitness clubs to encourage its use.

Users can scan QR codes before entering public premises such as markets and sports centers and would receive alerts if such places had logged visits from confirmed patients.

The CE is scheduled to leave for Beijing via Shenzhen at 1 pm on Tuesday and spend roughly three days in the capital city from Wednesday to Friday. Lam said she will meet officials of "four to six" ministries over preferential policies to be tailored for Hong Kong's economic recovery and future development.

"My target is still to deliver the Policy Address within the month of November, and likely on Nov 25," Lam said.