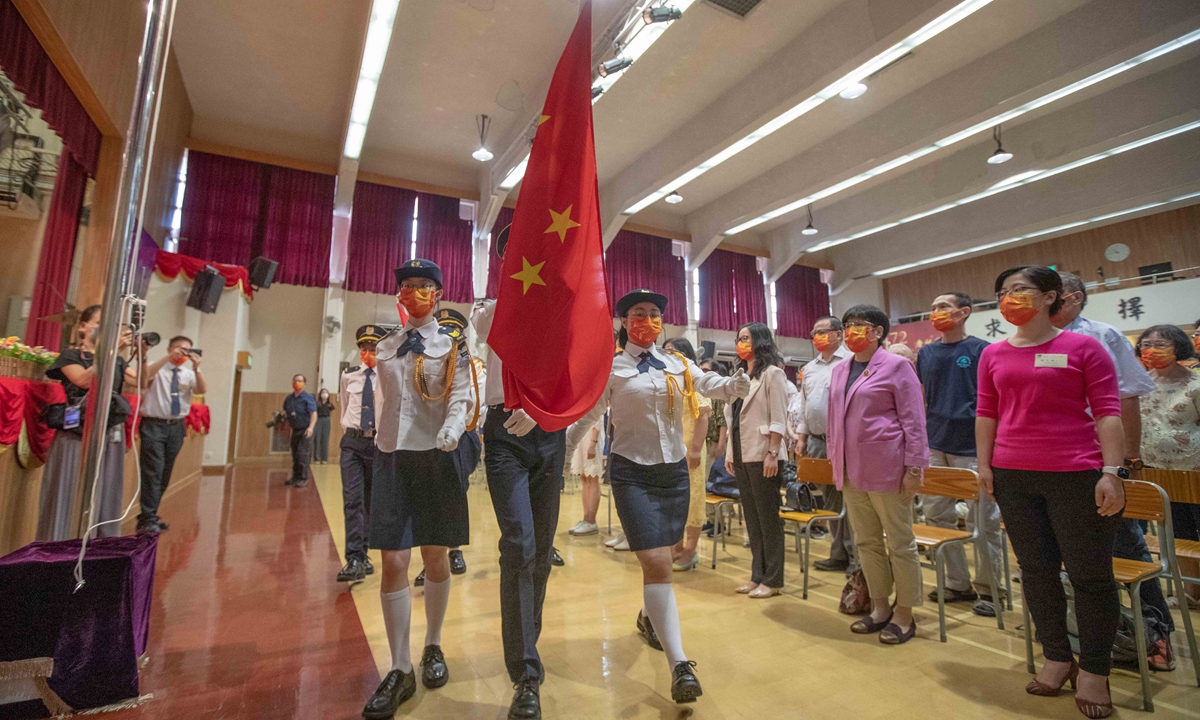 On the 25th anniversary of Hong Kong's return to the motherland, the Global Times is publishing eight special pages of insightful analyses, moving personal stories and creative infographics to offer an in-depth, comprehensive view on the historical transformation of Hong Kong from over 150 years of humiliating British colonial rule to a prosperous, world-class metropolis under the "one country, two systems" principle over the past quarter century.

This special coverage also aims to illustrate how the city, with the firm support of the central government, overcame social and political turmoil and restored peace and stability over the past three years and how its across-the-board integration with the mainland will ensure lasting stability and prosperity in the years and decades ahead. 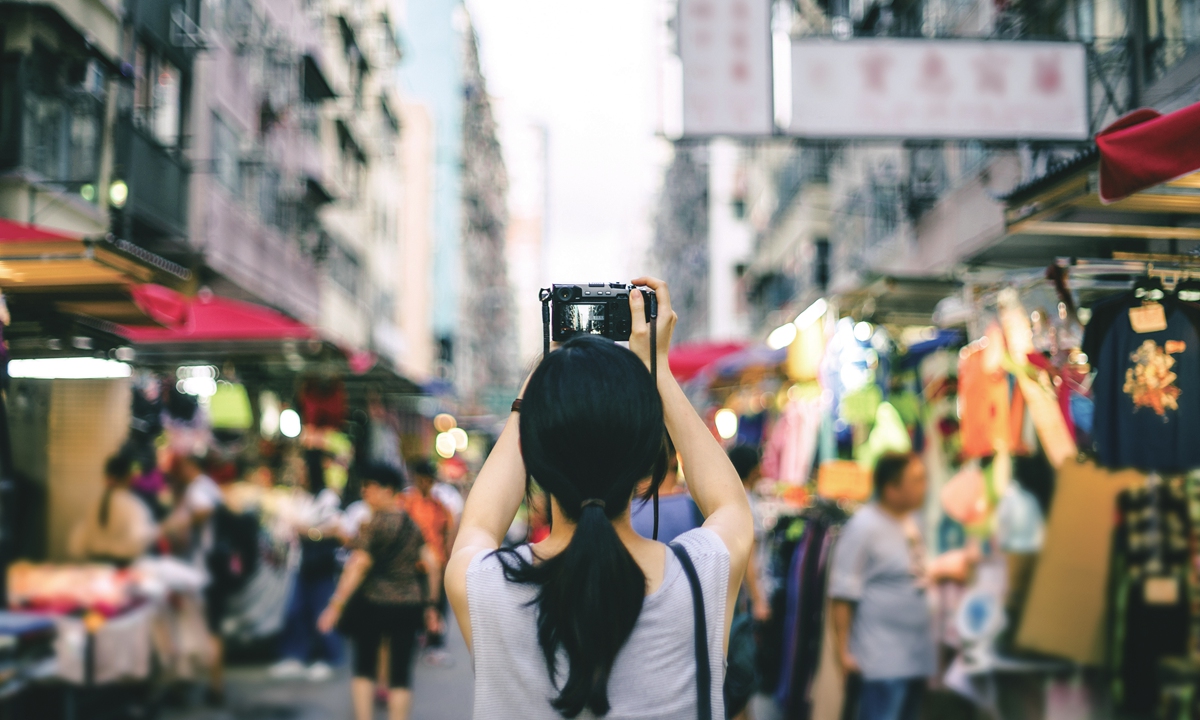 A young woman takes a photo of the street view in HKSAR. (Photo: VCG)

The celebration of the 25th anniversary of Hong Kong's return to the motherland marked not only a historic moment full of joy and pride shared by the Chinese people, but also a hard-fought recovery of the city since the 2019 turmoil, which deeply influenced and harmed the young people who live, work and study in the city.

Today, local youth said the stabilized social environment and the restoration of public order are bringing changes, concrete benefits and opportunities despite many tough reforms need to be carried out. They have confidence in the opportunities brought by the integration process between the mainland and the special administrative region. And those who used to hold immature and extreme political stances, after witnessing the changes in past 2-3 years, are getting more pragmatic and have a more in-depth understanding of the turmoil that harmed the city deeply in 2019.

Ashley Tse Hiu Hung, chairwoman of Hong Kong Youth Enlightenment, told the Global Times that "as a young person who experienced the change from turbulence to stability of the city, change in the past 2-3 years is huge."

"First, you don't need to be worried about the unexpected danger anymore. You don't need to be afraid of the attack from the black-clad rioters," she said, as these extremists who attacked ordinary people with different political opinions or even set fire on or threw bricks at innocent elders who just oppose their acts of vandalism have been deterred.

Kevin Ho, 25, studies sociology at a top university in Hong Kong. He was deeply impacted by the turmoil three years ago, as his research program has been badly interrupted due to the violent and destructive occupation by the rioters and violent protesters of his university.

He doesn't want to talk too much about 2019 with the Global Times reporter but wants to stress that if a protest targets and physically harms ordinary people, police officers and their families, as well as journalists, to create conflict and discrimination within the people from different places and with different opinions, and even turn to violence to damage the public order and the rule of law, even if it has "beautiful" pretexts like "democracy" and "freedom," people will sooner or later realize this is a color revolution that only serves a group of conspirators and aims to cheat and use the majority of society.

Although the economic recovery of the city was not easy due to the impact from the COVID-19 pandemic, Andy Leung, 30, manager of a bar in Wan Chai district of the city, said the people could at least walk on the streets and don't need to be worried about riots or unexpected conflicts between people with different opinions. "I don't know to what extent the people who used to support the turmoil would change their minds, but I'm sure that no one wants to return to the disorder in 2019," he noted.

The Global Times reporter found that it's hard to locate those young people who participated in the riots or violent protests in 2019, and let them share their thoughts today, because "this is a scar on the city," said the local residents. But some middle-age residents whose children around 18 years old with extreme thoughts had actively participated in protests in 2019 said their children are now more mature and pragmatic, as they eventually understand these radical acts will bring the city nowhere, and only a stable society with the rule of law could provide them the meaningful efforts to change their lives, while they have clearly seen that riots and violence could only end up in jail or fleeing to Western countries to have a life without certainty and dignity.

Life in Hong Kong, especially after the reform of the electoral system in 2021 and national security legislation in 2020, is the one with certainty and dignity. The Global Times reporter found that shopping, watching movies, and dining or having fun at malls and entertainment facilities downtown are the first choices for many young people during the weekend, and the shadow of the turmoil has totally faded away.

Other positive elements are also emerging due to the stabilized social environment and further integration between the mainland and Hong Kong, as well as the opportunities brought by the national development strategy to boost the construction of the Guangdong-Hong Kong-Macao Greater Bay Area, said experts.

Tse, who is also a doctoral candidate at the School of Public Policy and Management of Tsinghua University, told the Global Times that more and more Hong Kong young people are interested in getting higher education in mainland universities, as they saw great opportunities and advantages of having an educational background in the mainland. "Many young students and friends contacted me and asked for experiences in applying for top universities in the mainland," she said.

They want to get an experience living and studying in the mainland, to know more people and make friends in the mainland, so that they will have more opportunities in the future, which is a very pragmatic motivation, Tse noted.

According to data released on June 8 by the China Education Exchange Center in Hong Kong (HKCEEC), a Hong Kong-based institute that serves the local students for education in the mainland under authorization from the Ministry of Education, 13,190 middle school graduates, including students who graduated this year and in previous years, apply for mainland universities this year. The number of students who joined the Hong Kong Diploma of Secondary Education Examination this year was 500,064 and about 10 percent of them came to apply for mainland universities. Hong Kong media Sing Tao Daily reported on June 9 that this number has set a new record.

And the top 10 popular majors for Hong Kong students are: Economics and Management, Engineering, Journalism and Communication, Art and Sports, Linguistics, Law, Science, History and Psychology, according to the HKCEEC.

Analysts said the international ranking of many mainland universities and their actual academic capabilities are rising sharply, and this has reflected the comprehensive development of the mainland, which brings more possibilities to the young people in Hong Kong, as when they look at the mainland and see the change of the whole country, their anxiety and heavy pressure caused by limited vision that only focus on a city would be greatly cured.

With more young Hong Kong people coming to the mainland for education, they will have better understanding of the country and relations between the mainland and Hong Kong, so that fewer of them would be used and cheated by foreign anti-China forces to make unwise and illegal moves to challenge the unity of the country and public order, and they will eventually become the patriotic and open-minded generation with great potentials, experts said.

"Of course, Hong Kong is not perfect, and there are many tough missions for the new HKSAR government to accomplish, such as the housing problem that brings heavy pressure not only to the youth but to the livelihood of all residents, and this is what most Hong Kong young people are expecting the government to do after the new stable political environment has been formed," Tse said.