The Hong Kong Journalists Association has always been filthy and widely reviled. With its recent behavior, disdained for its “double standard,” the association has smacked itself in the face.

After Global Times reporter Fu Guohao was tied up and beaten at the airport, the HKJA issued a statement implying that Fu was beaten because he did not follow the rules and show his press card, and urged “mainland journalists to clearly show their press cards.” However, when the Hong Kong police wanted to crack down on fake reporters mixed with extreme rioters, the association made a ridiculous argument, declaring that it’s not advisable to arrest fake journalists or ask journalists to display an accredited press card during an interview, or Hong Kong will no longer have true freedom of the press. 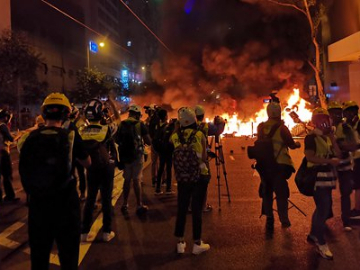 Following the controversial extradition bill, some Hong Kong reporters have released biased reports by only photographing the police on guard to keep social order and making a deliberate misrepresentation of them, in a bid to favor the violent protestors. Those morally corrupt journalists constantly interrupted police press conferences and swore at Hong Kong's chief executive Carrie Lam. Disappointedly, the Hong Kong Journalists Association (HKJA) wrongly backed up the reporters, serving as the shield for riots and illegality.

Over the past two months, the HKJA had also made numerous political proposals in violation of journalism ethics, including a vote to set up an independent committee probing into the police who have acted in accordance with the law. In my view, the committee is perfect to investigate these shameless reporters.