By He Shusi in Hong Kong | chinadaily.com.cn 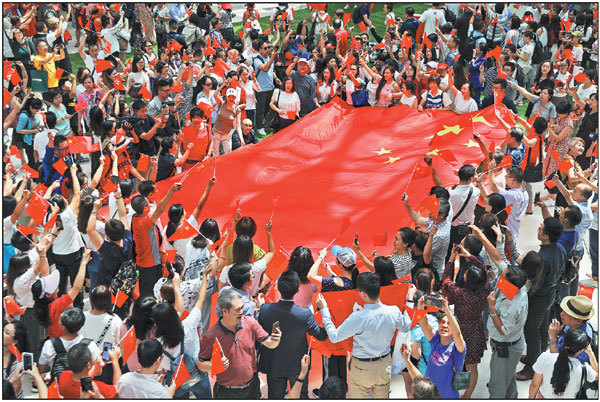 The office also expressed strong condemnation of and firm opposition to the groundless accusations by governments and politicians of the United States and the United Kingdom against Hong Kong police's law enforcement.

Hong Kong police arrested 15 prominent public figures on Saturday, including Lai and Martin Lee Chu-ming, on suspicion of organizing or participating in unauthorized assemblies on Hong Kong Island and in Kowloon on Aug 18, Oct 1 and Oct 20.

In the statement, an HKMAO spokesperson said the arrests are in accordance with Hong Kong laws and in line with the police force's duty to safeguard the city's rule of law, public order and justice.

It stressed that no one is privileged under the rule of law, and offenders must be prosecuted, adding the central government will continue to fully support Hong Kong police in conducting law enforcement, as well as to the judiciary for dispensing fair justice.

UK and US politicians, however, exculpated the suspects, saying their participation in unlawful assemblies was to "exercise freedom of speech and demonstration", the spokesperson said.

They chose to ignore the fact that those unlawful assemblies the 15 suspects took part in had evolved into extremely violent incidents, the spokesperson added.

In addition to slandering the Hong Kong police's legitimate law enforcement action by calling it the filing of "politicalized charges", they requested that Hong Kong authorities drop the related charges and also tried to pressure the SAR government via the US' so-called "Hong Kong Human Rights and Democracy Act", the spokesperson said.

Their conduct is reckless violation of human rights and the rule of law in Hong Kong, blatant interference in the SAR's judicial independence and high degree of autonomy, and gross interference in China's sovereignty and internal affairs.

It once again exposed the political plot of the US and British forces to support anti-China activities, the spokesman added, emphasizing the office's strong condemnation and firm opposition to their acts.

The spokesperson also noted that some Hong Kong opposition leaders and radicals often vilify the central government's comments on Hong Kong affairs as "interference in the SAR's high degree of autonomy", but at the same time turn a blind eye to foreign interference, or even ask for sanctions against Hong Kong.

The central government is firmly against any interference in Hong Kong affairs in any form by any external forces, and will unswervingly safeguard national sovereignty, security, development interests and Hong Kong's long-term prosperity and stability, the spokesperson said.