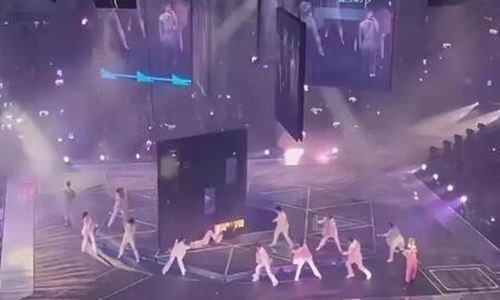 Photo: A screenshot of onsite video circulating on social media shows a big video panel fell down onto the stage.

The Chief Executive of the Hong Kong Special Administrative Region (HKSAR) John Lee expressed sympathy and required comprehensive investigation over the accident that happened during a concert by the popular boy band Mirror held at the Hong Kong Coliseum in Hung Hom on Thursday evening, according to the HKSAR official website on Friday.

The HKSAR has already instructed the concert to be suspended until the structure of the stage is proved to be safe, according to the official information website of HKSAR. The local authorities have required relevant departments to set up a task force to investigate the cause of the accident and to follow up on it.

The onsite video circulating on social media shows that a big video panel fell down onto the stage during the boy band Mirror's concert, hitting at least two dancers. The incident occurred at around 10:35 pm, according to local media reports.

Five people were injured during the accident and three of them were rushed to Queen Elizabeth Hospital, where one was in a serious condition, and the other are in stable condition, RTHK reported on Friday. Some fans at the site said they were shocked, while others said the accident caused psychological trauma, according to the report.

"I am shocked by the incident. I express sympathy to those who were injured and hope that they would recover soon," John Lee said in a statement on Friday. Lee has contacted the relevant departments to comprehensively investigate the incident and review the safety requirements of similar performance activities in order to protect the safety of performers, working staff and members of the public.

MakerVille, the concert organizer said it will cancel the remaining performances and livestreaming and will take thorough investigation over the cause of the accident.

Since its official opening on April 27, 1983, the Hong Kong Coliseum is one of the most popular multipurpose indoor stadiums for international sports events, entertainment programs, pop concerts and conventions.