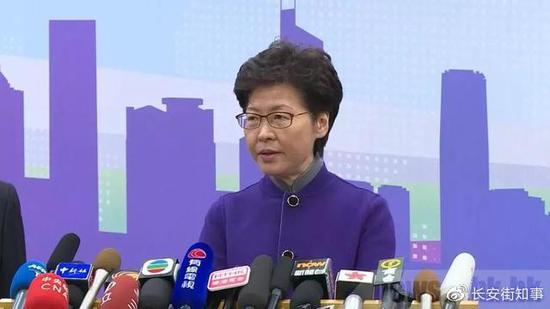 Lam said she believed Junius Ho, an HKSAR lawmaker running for the re-election in district council of Tuen Mun, was attacked as a district council election candidate during his campaign. Lam sent her regards to him, hoping him to recover soon, according to the HKSAR government.

Ho was stabbed in the left side of his chest by a male in his election campaign event near Richland Garden, Tuen Mun, on Wednesday morning. He was sent to a hospital and fortunately not in a life-threatening condition.

Two of Ho's colleagues sustained injuries in hands and arms.

Lam said she feared that the escalating violence in Hong Kong during the past months would be infectious and that some people are becoming more tolerant of violent behaviors.

But no act of violence should be tolerated in any civilized societies, which should rather be condemned by the whole community, she said.

Lam also said she noticed that because the attack against Ho took place during the district council election campaign, some political groups in Hong Kong are now concerned if some people have intentions or have planned to sabotage the election.

The chief executive stressed that the HKSAR government will, like always, work to hold a fair, just and safe election and the whole society must jointly condemn any actions sabotaging the election, especially the violent ones.