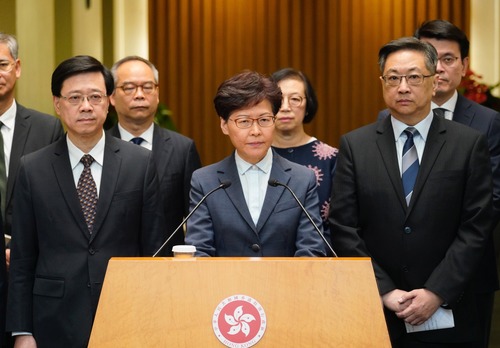 Noting that some radical demonstrators besieged and stormed the liaison office building, and defaced the national emblem, Lam said such acts blatantly challenged national sovereignty and touched the bottom line of the principle of "one country, two systems."

And they hurt the national sentiment and aroused indignation of people in the HKSAR, she added.

Lam also strongly condemned the violent acts which occurred in Yuen Long of Hong Kong's New Territories, saying that the HKSAR government will also spare no effort to investigate, follow up on and deal with them in accordance with the law.

Hong Kong is a society with rule of law and will not tolerate any violent acts, she noted, saying violence is not a solution to any problem; violence will only breed more violence, and at the end of the day, the whole of Hong Kong and the people will suffer.

The chief executive called on people from all walks of life to uphold the rule of law and say no to violence.