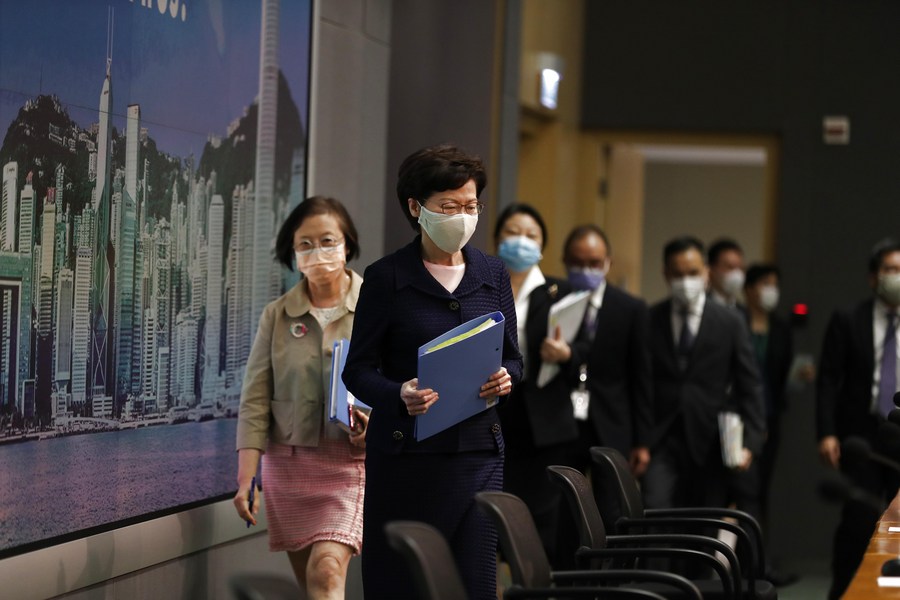 HONG KONG, March 17 (Xinhua) -- Carrie Lam, chief executive of the Hong Kong Special Administrative Region (HKSAR), on Wednesday suggested that the Legislative Council (LegCo) consider setting up a subcommittee under the House Committee to discuss issues related to the improvement of the electoral system of the HKSAR.

After that, the HKSAR government will organize and regulate relevant election activities in accordance with the revised electoral laws, implement the new electoral system suiting Hong Kong's realities, and properly arrange the and hold elections in the next 12 months, Lam said.

Lam said that the HKSAR government will spare no efforts in carrying out the above work, but the support and cooperation of the LegCo are also indispensable. Based on past experiences, the HKSAR government proposed that the LegCo consider setting up a subcommittee under the House Committee to allow LegCo members to buy time to discuss the main contents of the NPC's decision and Annexes I and II of the HKSAR Basic Law later amended by the NPC Standing Committee.

Lam said that after the HKSAR government has introduced the bill to the LegCo, the subcommittee can be transformed into a bills committee and immediately move forward to review the bill.

Lam stressed that the central authorities took the initiative to improve the electoral system of the HKSAR at the national level after fully considering Hong Kong's actual situation. Fully implementing the principle of "patriots administering Hong Kong" and ensuring the steady and sustained implementation of "one country, two systems" will help maintain Hong Kong's long-term prosperity and stability.