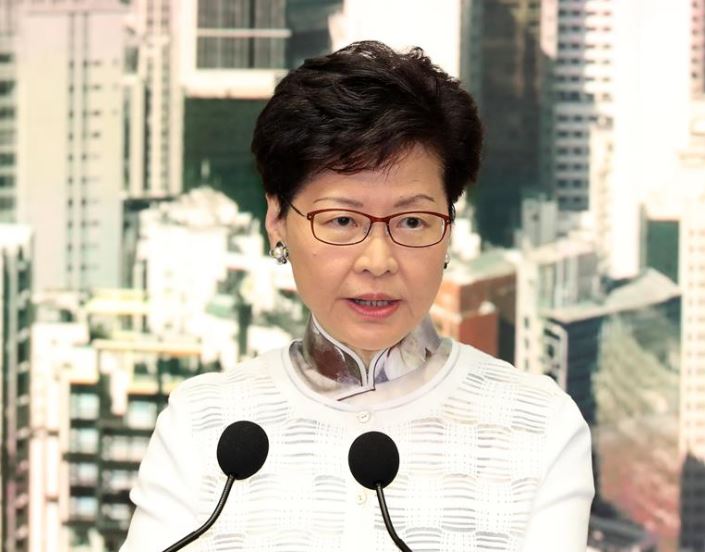 HONG KONG, Sept. 27 (Xinhua) -- Chief Executive of China's Hong Kong Special Administrative Region (HKSAR) Carrie Lam said Friday that she will continue reaching out to people with different backgrounds and political stances through different forms of dialogues to seek a way out for Hong Kong.

At the first "Community Dialogue" session held on Thursday evening, she and the HKSAR government officials had very candid communication with the participating members of the public, and together they took a meaningful first step toward getting Hong Kong society out of the current impasse, Lam said in her speech at a reception marking the 70th anniversary of the founding of the People's Republic of China (PRC).

The chief executive also revealed that she is preparing her third annual policy address, and the HKSAR government is expected to announce in the coming one or two weeks some projects that are ready, including those related to the care of children with special needs, maintenance of old buildings, environment and sports development.

Lam said the upcoming policy address will focus on the issue of land and housing supply, in the hope of responding effectively to public concern and demonstrating the HKSAR government's determination to seek change.

Speaking at another reception on Friday of media sector to celebrate the 70th anniversary of the founding of the PRC, Lam said Hong Kong's advantages in finance, trade and logistics will continue to play out under the "one country, two systems" principle.

Since its return to the motherland in 1997, Hong Kong has been closely linked with the mainland. It has contributed to the national development during the reform and opening-up and in the meantime benefited from the rapid development of the Chinese mainland, Lam said.

Looking ahead, Hong Kong will seize the opportunities brought by the Belt and Road Initiative and the Guangdong-Hong Kong-Macao Greater Bay Area, she said.

During the occasion, the chief executive also called on media practitioners to uphold professionalism and provide impartial reports that will help bring Hong Kong back to the track of rational dialogue.

Also on Friday, in a post on social media, Lam expressed gratitude to all the participants of Thursday's community dialogue for their care and concern for Hong Kong's current situation and future.

One father asked her at Thursday's session whether they could "hand over a beautiful Hong Kong to the next generation," Lam recalled, stressing that she believes this is the wish of everyone in Hong Kong as well as the ultimate goal of the HKSAR government in finding a way out through dialogues.

Lam also vowed to continue with the mechanism of dialogue in different forms, including online interactions.