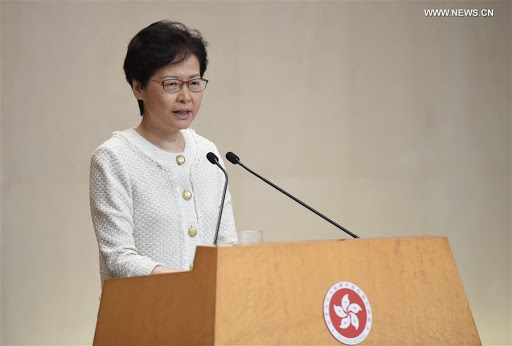 HONG KONG, Nov. 17 (Xinhua) -- Chief Executive of the Hong Kong Special Administrative Region (HKSAR) Carrie Lam said Tuesday that only by correctly understanding the relationship between "one country" and "two systems" and always acting in accordance with the Constitution and the Basic Law, will the steady and sustained development of "one country, two systems" be ensured.

Lam made the remarks at a legal summit organized by the Justice Department of the HKSAR government to mark the 30th anniversary of the promulgation of the Basic Law.

"One country, two systems," taking account of history and realities of Hong Kong, is designed to preserve the characteristics and strengths of Hong Kong as much as possible and to enable Hong Kong residents to maintain their way of life on the prerequisite of upholding national unity and territorial integrity and maintaining the prosperity and stability of Hong Kong, Lam said when addressing the forum themed "Back to Basics."

The original purpose and mission of "one country, two systems" have never changed and have been the fundamental spirit of various policies by the central authorities for the HKSAR, Lam said, stressing that the issue of sovereignty cannot be discussed and advocating of "Hong Kong independence" cannot be tolerated.

Lam cited the two issues concerning the Constitution that the HKSAR was unable to address during the past months, which involved the vacancy of the HKSAR Legislative Council (LegCo) due to the election postponement and the qualification of four LegCo members who were ruled by Returning Officers as not upholding the Basic Law and swearing allegiance to the HKSAR.

To fulfill her responsibility, Lam twice requested the central government to submit the issues to the Standing Committee of the NPC for solutions at the constitutional level.

The practice is in line with the Constitution and the Basic Law and no slanders and smears by foreign governments or political organizations are allowed, Lam said.