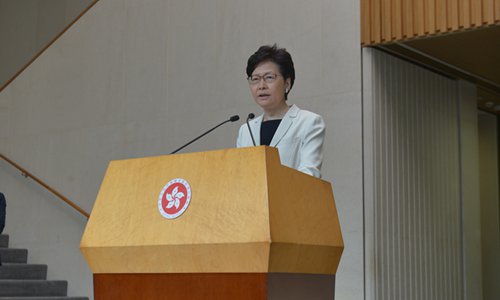 Lam said at a press conference that the HKSAR government will ramp up investment and expenditures in a bid to save the Hong Kong economy.

The government's fiscal condition is better than that of the Asian financial crisis more than 20 years ago, Lam said, adding that the government has already announced about 290 billion Hong Kong dollars (about 37 billion U.S. dollars) of relief measures.

Lam urged the Legislative Council to pass the economic stimulus including measures in the budget as soon as possible and speed up approving government projects.

To tackle the economic hardship, the HKSAR government has announced two rounds of policies under the anti-epidemic fund and some other relief measures in its annual budget, including 10,000 Hong Kong dollars of cash handout for each permanent resident aged 18 or above and also subsidies to help cash-strapped firms pay wages.

Financial Secretary of the HKSAR government Paul Chan on Monday said the current main task is to quickly implement existing measures and the government will not hesitate to launch more measures in the future if necessary.

Chan said he is not optimistic about the economic outlook in the second quarter and expects Hong Kong's economy to gradually recover in the second half of the year if the COVID-19 pandemic is contained in the world.

During Tuesday's press conference, Lam also said it is time to relax social distancing measures and the government will announce new policies as soon as possible if the decision is made.

A string of social distancing measures put in place by the government including limiting group gatherings and closing some entertainment venues will expire on Thursday midnight.