The US, a country that claims to advocate human rights, freedom and democracy, has exposed its hegemonic ideology by violating personal privacy, said Paul Chan Mo-po, financial secretary of the Hong Kong Special Administrative Region (HKSAR). He strongly criticized the US on Sunday in response to its latest sanctions against several Hong Kong officials. 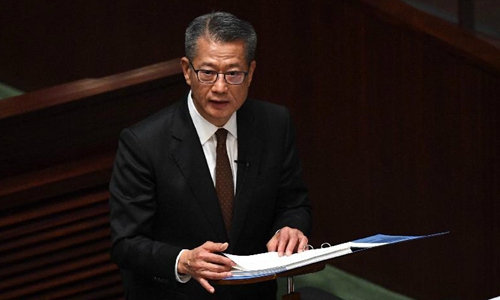 Financial Secretary for the Hong Kong Special Administrative Region Paul Chan Mo-po gives a speech on the 2020-21 budget of Hong Kong in the Legislative Council on February 26. (Photo: HKSAR government)

"The sanctions reflect a typical double standard of the US, which reveals its self-righteous, hegemonic ideology by blatantly intimidating others," Chan said on an online blog on Sunday.

The US imposed sanctions against 11 officials from the Chinese central government and the HKSAR government on Friday, including Hong Kong Chief Executive Carrie Lam, exposing their addresses and ID numbers, local media reported on Saturday.

Maintaining national security is a matter of principle, and has no room for negotiation, Chan stressed. There is no need to worry about the so-called US sanctions, as long as Hong Kong keeps its focus on development under the firm support of the central government.

Under the pretense of national security, the Trump administration signed an executive order to block all American transactions with TikTok's Chinese parent company, even when there was no proof that the app threatened US security, Chan commented.

The "Clean Network" scheme, which aims to separate Chinese tech companies from US mobile carrier networks, app stores, apps, cloud services and cables, profoundly undermines the operating foundation of the free, rules-based, and fair market competition that the US had once advocated.

"The crude decision made by the Trump administration will eventually end up hurting itself and damaging the global market," Chan noted.

With regard to the national security law for Hong Kong, Chan explained that US interference has highlighted the urgent need to enact the law. Hong Kong has become one of the cards that the US would use to showcase its hegemony on the global stage, and an excuse used by some American politicians to target China.