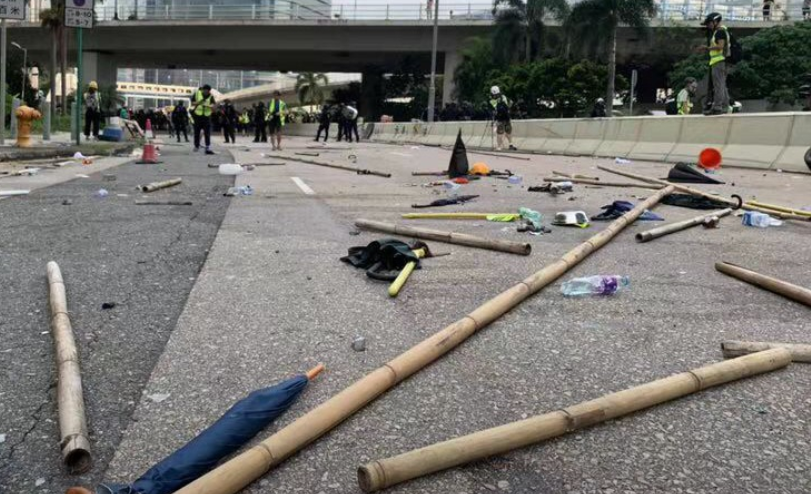 The Hong Kong Special Administrative Region (HKSAR) government on Saturday condemned protesters damaging smart lampposts in eastern Kowloon, calling their acts "totally unreasonable."
Protesters want the lampposts removed, claiming they are equipped with facial recognition technology to spy on them. But a government spokesperson said that authorities have repeatedly made it clear that the built-in sensors and cameras are to monitor traffic flow, air quality and the weather.
"It's totally unreasonable that the protesters ignore the facts and damage (the lampposts) on purpose," added the spokesperson.
Some protesters set up barricades and blocked a section of the street outside Sham Shui Po Police Station on Saturday night, causing traffic congestion in the area.
Others clashed with the police, throwing petrol bombs and spraying officers with fire extinguishers. Such acts posed a serious threat to residents and officers at the scene, noted the spokesperson.
The HKSAR government urged protesters to end violence and called for a rapid restoration of social order.
Chief Executive of the HKSAR Carrie Lam on Saturday appealed for a way out of the current situation on her Facebook page.
"My proposal to society to have a platform for dialogue has earned a lot of doubt and criticism. I know the anger in the community is deep," Lam wrote on social media. "But we must all strive together to find a way out of the current deadlock."
In her post, Lam said she had invited individuals from different backgrounds to suggest ideas for a platform to promote an open dialogue.