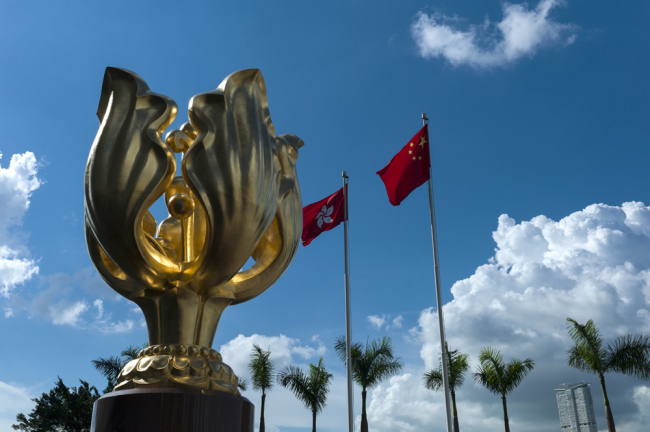 HONG KONG, Aug. 4 (Xinhua) -- A spokesman for China's Hong Kong Special Administrative Region (HKSAR) government said on Sunday that recent protests in Hong Kong have gone far beyond the limits of peaceful and rational protests for which the HKSAR government and general public will not condone under any circumstances.

In response to the deteriorating situation of recent protests, the spokesman said in a statement that "blatant violation of law, wanton destruction of public peace and violent attacks on the Police will harm Hong Kong's society, economy and our people's livelihood."

The spokesman said that recent protests which were organized in the name of expressing demands have intensified illegal and road-blocking acts.

As for some protesters who are instigating the public to participate in strikes and blocking roads and public transport on Monday, the HKSAR government hoped that while expressing their demands, protesters should abide by the law and respect the rights of other members of the public, the spokesman said.

The HKSAR government also calls on the general public to "stand fast at their posts and cherish Hong Kong's hard-earned international financial centre status, stable economic base and a diverse and inclusive social environment."

Hong Kong's economy is suffering from both external headwinds and local social issues. The latest economic data, which is the worst over the past decade, shows that the economy is weakening and the risk of an economic downturn is increasing, according to the spokesman.

"Any large-scale strikes and acts of violence will affect the livelihood and economic activities of Hong Kong citizens. This will only undermine further the local economy that is facing downside risks, as well as the confidence of the international community and overseas investors in Hong Kong's society and economy, causing loss and damages to law and order, economy, people's livelihood, employment and eventually to the detriment of all quarters of society," the spokesman added.

The HKSAR government reiterated that the entire civil service has to stay united amid all the pressure and challenges.

"This is a difficult moment and government colleagues must act in the overall interest of Hong Kong and work together to uphold the core values of the civil service," said the spokesman. "The effective operation of the Government and provision of public services must not be affected by any personal beliefs in order to avoid undermining public confidence in the impartial discharge of duties by civil servants."