HONG KONG, July 28 (Xinhua) -- The government of China's Hong Kong Special Administrative Region (HKSAR) on Sunday strongly condemned an illegal rally in Yuen Long during which a series of violent acts were committed on Saturday. 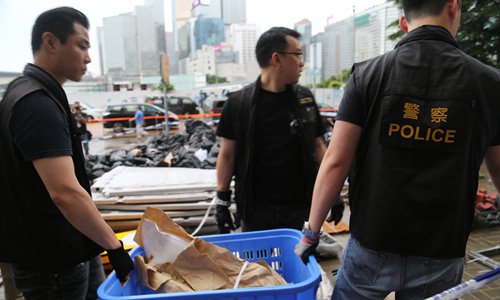 Hong Kong police are collecting evidence from the LegCo Complex of Hong Kong which was stormed and ransacked by violent protesters on July 1, 2019. (Photo: Global Times)

"The government deeply regretted that some people still took part in the public procession and public meeting in Yuen Long, despite the prohibition and objection by the police," a spokesman of the Hong Kong SAR government said.

"After the public procession, some radical protesters violently charged police's cordon lines, vandalized a police vehicle and blocked roads. The government strongly condemned the protesters for breaching the public peace and breaking the law deliberately."

"The police will take serious follow-up actions with those violent protesters," he said.

During the operation, police arrested 11 men, aged between 18 and 68, for offences including unlawful assembly, possession of offensive weapon, assaulting police officer and assault, Hong Kong Police Force said in a statement early Sunday.

At least four police officers were injured during the operation.

"Police condemn the deliberate attacks by violent protesters and stress that police will investigate all illegal and violent acts. Police are capable and determined to maintain law and order in society and do not tolerate any violent acts," the statement said.

Until 1:00 a.m. Sunday local time, a total of 23 people were found injured in the illegal public rally in Yuen Long, who were sent to several hospitals for treatment. Among them, two were in serious condition, 11 were stable while 10 had been discharged, according to the latest information from the Hong Kong Hospital Authority.