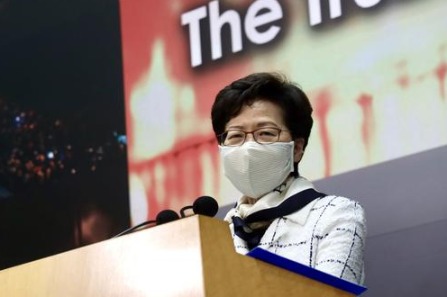 "I am very worried about this outbreak in community, not because of the number of nine confirmed patients, but also because this particular cluster reflects some characteristics which we might not have seen before," Lam said, adding that an investigation was underway.

Regulations on social distancing measures concerning group gatherings and restrictions requiring people entering Hong Kong from outside to be quarantined for 14 days will expire later this month.

Lam said the HKSAR government will take a very cautious and prudent approach in dealing with these measures already put in place, and will announce the decision soon to the public.

As regards residents living in the same building with the confirmed patients, Secretary for Food and Health of the HKSAR government Sophia Chan said at the media session that the building had been cleaned and more than 1,000 sample bottles have been handed out for virus test use.

As over 800 residents of the building had submitted their samples, Chan appealed to the rest to return them as soon as possible, and Chan also called on all members of the public to maintain personal hygiene and keep social distancing.