HONG KONG, Sept. 17 (Xinhua) - Chief Executive of China's Hong Kong Special Administrative Region (HKSAR) Carrie Lam said on Tuesday the HKSAR government will start its first session of the dialogue platform with the community next week amid efforts to stop violence and restore law and order in Hong Kong. 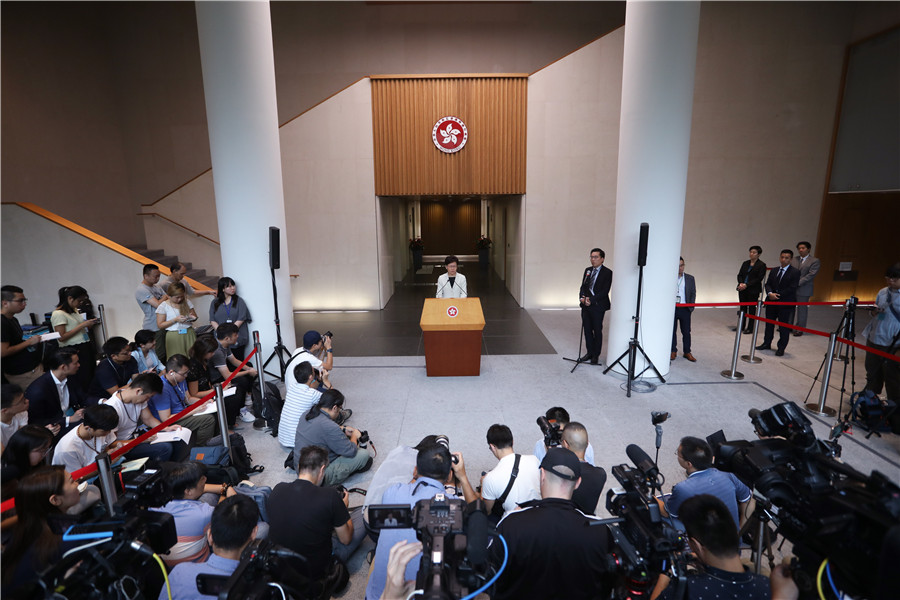 Lam stressed the dialogue platform is not a one-off gimmick type of function but intended to be organized on a very sustainable and long-term basis.

When meeting the press before presiding the Executive Council conference at the government headquarters, Lam said the dialogue session with the community will be carried out transparently, and the HKSAR government is open to different topics.

She hoped participants from all walks of life, regardless of their background, stance or social stratum, can express and exchange their views in an atmosphere of "letting a hundred flowers blossom."

"This is because of our conviction that communication is far better than confrontation," she said.

Sparked by the now-withdrawn amendments to ordinances concerning fugitive offender transfers, the social unrest, sometimes quite violent and disruptive, now entered the fourth month in Hong Kong, with underlying problems well beyond the bill.

It's important for the HKSAR government to listen and engage the community to have a better understanding of those problems about housing, land shortage, less diversity and less inclusiveness in the economy, Lam said.

"Since we are going into a new style of governance that is more open and more people-oriented, I think this sort of dialogue will be very helpful," she said.

When asked about the illegal demonstration, and confrontations and even fighting between groups of people over the weekend, Lam said the HKSAR government condemns all forms of violence and such acts are not acceptable in a place like Hong Kong, where people are so proud of the rule of law.

"At the moment, Hong Kong is undergoing a very difficult situation. We need to work as a team not only within the HKSAR government but also with community and society at large to overcome the current difficulties," she said.

When asked about Moody's downgrade of Hong Kong's outlook rating from "stable" to "negative" on Sunday, Lam said she did not agree with the rating and Moody's decision is disappointing.

"But the continued instability and social unrest in Hong Kong will inevitably undermine and adversely affect international perception about Hong Kong's business environment," Lam said. "This is something that we have to be very alert to."

"That's why I said while creating this dialogue platform, the first priority is still to stop this violence and to restore law and order in Hong Kong as soon as possible," she said.