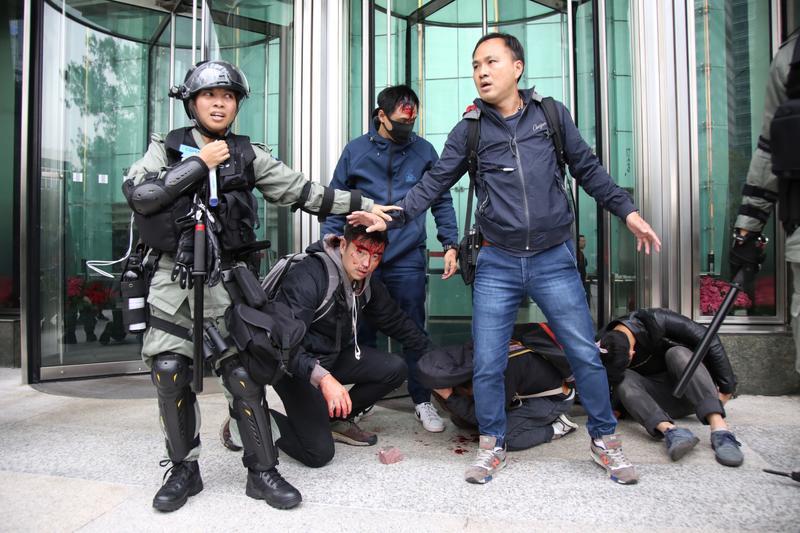 Two police community relations officers bleed after being attacked by a group of rioters as their colleagues try to guard them from further harm in Central on Sunday. (Photo: China Daily)

The Hong Kong Special Administrative Region government on Sunday urged the community to understand and respect the constitutional arrangement for the city under the "one country, two systems" principle — after thousands of protesters gathered to demand "universal suffrage". It also expressed strong disapproval of protesters calling for foreign intervention in the affairs of Hong Kong.

A government spokesman said on Sunday that the community needs to understand that apart from being accountable to the special administrative region, the chief executive selected by univeral suffrage is appointed by and shall also be accountable to the central government.

These remarks came after hundreds of violent radicals gathered at Chater Garden in Central on Sunday afternoon — blocking roads and attacking police officers.

The spokesperson also expressed disapproval of demands by some protesters urging foreign governments to impose "sanctions" on Hong Kong.

Foreign governments, legislatures or organizations have absolutely no role in matters relating to Hong Kong's constitutional development, the spokesperson emphasized.

The community needs to reach a consensus on these core principles and resolve differences through dialogue in a peaceful manner and with mutual trust.

Otherwise, it will be very difficult for society to hold any constructive discussion on constitutional development, the spokesperson added.

The government also pledged to create a social atmosphere conducive to political reform. This is so it can promote constitutional development in accordance with the Basic Law and relevant decisions by the Standing Committee of the National People's Congress, the spokesman said.

Due to outbreaks of violence during protests, police requested organizers to end the rally at around 4:30pm.

However, some radical protesters erected barricades and scattered bricks on roads. They also defaced facades of nearby buildings.

At around 8pm on Sunday, some rioters suddenly threw four petrol bombs at report room and car park of the Tai Po Police Station. Given that the report room was opened to the public at that time, rioters' acts posed a serious threat to the safety of innocent members of public and endangered public safety.

At least two officers of the Police Community Relations Office were attacked by radicals wielding sticks and other weapons. The attack occurred when police were having discussions with organizers of the rally. The officers were left bleeding from head injuries.

In a statement, a police spokesman strongly condemned such acts of violence. The government also strongly decried the "outrageous attacks".

Police pledged to strictly enforce the law and bring the assailants to justice.

Lau was arrested after the public meeting as he "contravened the conditions of a letter of no objection (to the rally) and had repeatedly obstructed police", explained Ng.

During the public meeting, at least eight other men were intercepted by the police patrolling the area. They were arrested for possession of offensive weapons and also for having instruments fit for unlawful purposes - such as hammers, spanners and extendable batons. These weapons were used to cause damage and to attack officers, he said.

If the protesters had expressed their views rationally and peacefully, there would have been no reason for police to intervene, Ng added.