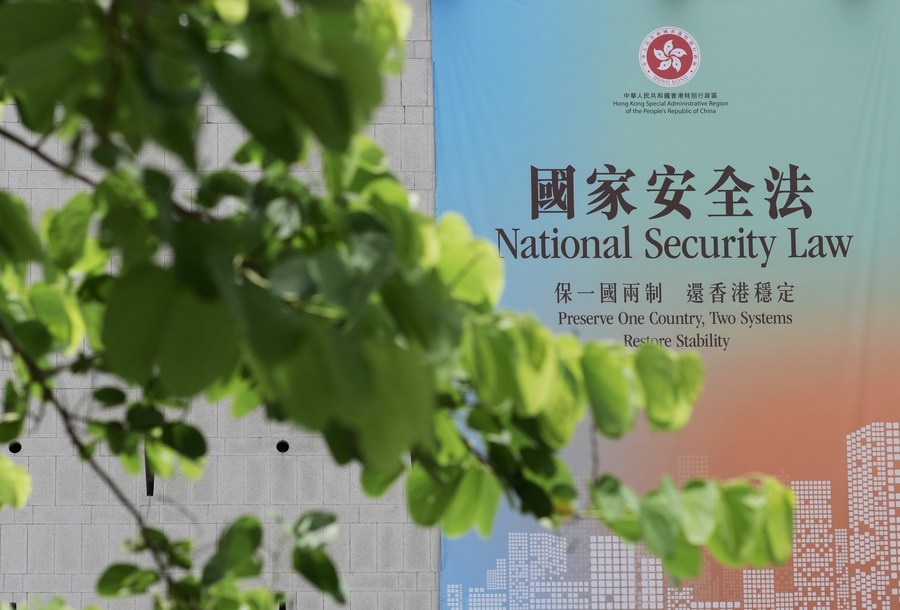 A billboard on the Law of the People's Republic of China on Safeguarding National Security in the Hong Kong Special Administrative Region (HKSAR) in Central area in Hong Kong, south China, June 29, 2020. (Photo: Xinhua)

HONG KONG -- The Hong Kong Special Administrative Region (HKSAR) government said on Thursday that it deplores and opposes the announcement by the British government on providing a pathway for Chinese nationals in Hong Kong who are holders of the British National Overseas (BNO) passport or eligible for it to reside and obtain citizenship in Britain.

Given the history, it is hypocritical for Britain to deliberately violate its pledge made in the British memorandum associated with the Sino-British Joint Declaration despite the Chinese firm opposition and repeated representations, and insist on using the BNO passport or status, which some people in Hong Kong still hold, for political maneuver on the pretext of changing the policy to provide a route for relevant persons to reside and obtain citizenship in Britain, said a spokesman of the HKSAR government.

Since the establishment of the HKSAR, the Chinese central government has been upholding and implementing the principle of "one country, two systems". The HKSAR enjoys a high degree of autonomy in accordance with the HKSAR Basic Law and has maintained prosperity and stability, the spokesman noted.

National security falls squarely under the purview of the central authorities, and the enactment of the Law of the People's Republic of China on Safeguarding National Security in the HKSAR is constitutional, lawful, rational and reasonable, the spokesman said, stressing that matters of the HKSAR is China's internal affairs in which no other state is allowed to interfere under any pretext.

Taking account of the historical background and the existing circumstances of Hong Kong, the central government has permitted the Chinese nationals in Hong Kong who were born before June 30, 1997, to use the BNO passport as a travel document for the purpose of travelling to other states and regions. Since Britain violates its pledge in the first place, the Chinese foreign ministry has announced that China will consider not recognizing the BNO passport as a valid travel document and reserve the right to take any further measure.

The HKSAR government is in support of this and will follow up accordingly, the spokesman said.

Currently, no matter they hold BNO passport or not, Chinese nationals in Hong Kong who use the HKSAR passport to travel to other states and regions enjoy not only consular protection and services rendered by the motherland but also immigration facilitation, the spokesman pointed out.

At present, 168 countries and territories have granted visa-free access or visa-on-arrival to HKSAR passport holders. The HKSAR government's Immigration Department has issued nearly 6 million HKSAR passports which are still within their validity period to facilitate the travelling of relevant persons in Hong Kong, added the spokesman.

The high-profile measures taken by the British government on the pretext of the national security law for the HKSAR are purely made out of political maneuver. They not only seriously violate Britain's own pledge, but also seriously interfere in the affairs of the HKSAR, the spokesman pointed out.

The British government has made it an issue again on BNO passport after its unilateral announcement to suspend its agreement with Hong Kong for the surrender of fugitive offenders. The HKSAR government deplores and opposes such moves of Britain, and urges the British government to stop interfering in the affairs of the HKSAR and return to the normal tracks, the spokesman said.